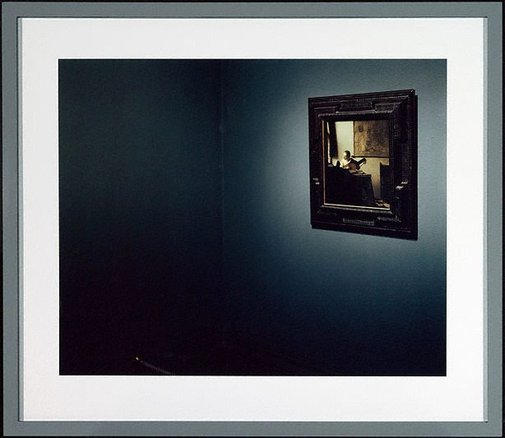 'National Gallery 2 (Vermeer), London' 2001 is different to most of Struth's museum photographs in that it contains no people. Taken at the National Gallery's 2001 Vermeer exhibition it shows the Metropolitan Museum's Vermeer 'Woman with a Lute' 1663 alone, just as Vermeer's woman is alone. In his museum photographs Struth usually sets up relationships between the audience and the painting and the view tends to be rather frontal with a space parallel with the pictorial surface. This device frames the action and freezes the moment in the image.

In this case he has responded to the qualities of the Vermeer painting and created a space that seems to echo or draw out many of the very special pictorial characteristics of Vermeer and of this picture in particular. Of all Vermeer's paintings this one seems to be most directly influenced by the special lighting experienced through the camera obscura. We know that Vermeer was a good friend of the astronomer and maker of optical instruments Antoni van Leeuwenhoek. Together they experimented with camera obscura some (most famously David Hockney) have suggested that he actually used the system to produce the compositions however the pentimento in the works suggest that it was not this direct but rather that the visual effects captured his imagination and were incorporated into the paintings. This is particularly evident in the softening of edges and the halo effect of light around objects.

In 'Woman with a lute' this effect is particularly evident around the woman's head and even within her features. Struth has composed his picture with no clutter so that the painting is isolated against a grey field and around the picture we can see a halo of light created by the lighting of the gallery. It is a soft glowing aura just like that in the painting. Another of the qualities of Vermeer's painting is the isolation of the woman a sense of privacy that we the viewer are permitted to intrude on. Very often Vermeer creates this atmosphere of secrecy and self-absorption in his sitters. In this composition the painting is not composed in Struth's normal flat planar manner but is shot obliquely with the corner of the room at the centre. The painting faces into the corner into the pictorial space constructed in the triangular wedge between pictorial surface and the dark grey walls. Outside the illuminated spots the wall falls away into shadow. It is a very secretive and atmospheric photograph.

Browse other works by Thomas Struth