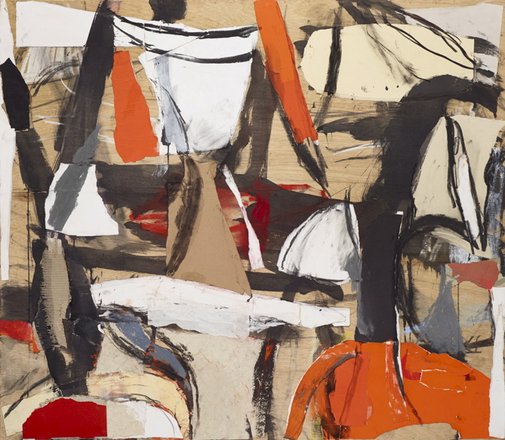 Ross Laurie lives and works on a cattle and sheep property farmed for generations by his family at Walcha, on the Northern Tablelands of New South Wales. This landscape of his birth and memory infuses his art and remains its fundamental inspiration.

Laurie’s work is concerned with questions of pictorial space, colour and form. His drawings do not capture a ‘view’ in the traditional sense, but rather try to express a sense of the landscape as it is felt and experienced.

‘Walcha III’ is from his ‘Walcha’ series of four drawings. They were made over three seasons, from autumn until spring, times of rain and drought, sunlight and fog. Elements in the drawings – such as multiple horizon lines, organic shapes, light and colour – can all be found in the Walcha landscape: in the garden’s blossoms, the rich ochres of the earth, the orange and grey of lichen and moss, as well as the shadowy folds and open vistas of hills and valleys, the distinctive v-shaped trunks of stringybarks, and the groves of ornamental poplars and noxious blackberry. ‘My work feels like the bush around here’ says Laurie. ‘It is unkempt – there is a messiness and order at the same time’.

ink, charcoal, pastel, collage on board