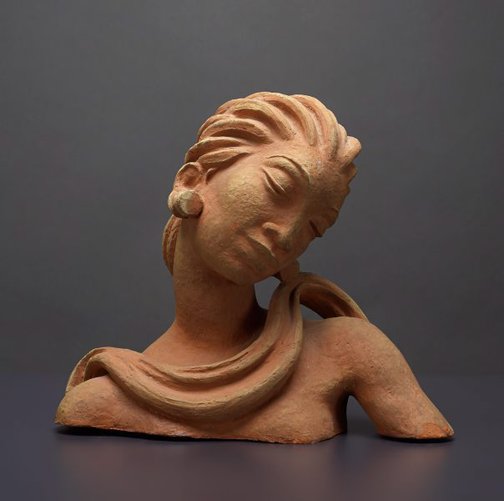 Czech Republic born Fleischmann was in this country for a short period, but his influence on the development of early modern Australian sculpture was significant. He arrived in Sydney in 1939 after travel studies through Europe, South America and Indonesia, and became ensconced at Merioola, the celebrated community of internationalist-inspired painters, sculptors and photographers based in the Edgecliffe mansion of the same name.

This terracotta sculpture is typical of Fleischmann's early Sydney work, when subjects from his Balinese travels in the late 1930s continued to inspire his practice. The arabesque formation of the figure is also evident on the influences of his Viennese period, with the unusual truncation of the bust suggesting his attention to German sculptor Wilhelm Lehmbruck (1881-1919). While referring to the classical foundations of Fleischmann's practice, the work is indicative of his modern stylisation of gesture and movement, creating the aesthetic of elongated figurative forms for which he is best renowned.

Signed base of bust verso, incised "A. FLEISCHMANN". Not dated.

Gift of Joy and Dominique Fleischmann 2014

© Reproduced with permission of the Arthur Fleischmann Foundation

Browse other works by Arthur Fleischmann