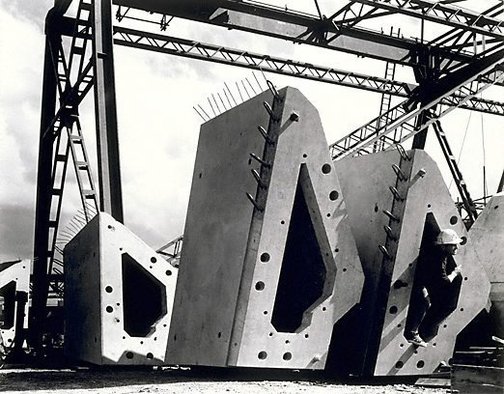 Max Dupain devoted much of the latter part of his life to photographing architecture; evidenced in the "thousands of images" he took of the Sydney Opera House. With its simple geometric shapes and sharp lines, the building lent itself well to his modernist aesthetic. In many of these photographs, everyday elements became abstracted through the formal use of scale and perspective. In this photograph form clearly governs the composition. The human figure is rendered largely insignificant against a monumental architectural background. In describing his passion for the built medium Dupain wrote:

"Dealing with architecture brings me very close to the state of mind required to making pictures. A fine building embodies so many elements of practical and aesthetic content: design, form, texture, human scale, craftsmanship and context. The photograph has to reiterate all these things or fail and you have only the bare necessities to do it: optics, chemistry and light".
[Source: Zeny Edwards 'Sydney's Dupain' in Jill White, Dupain's Sydney, Chapter & Verse, Sydney, 1999, p.12]