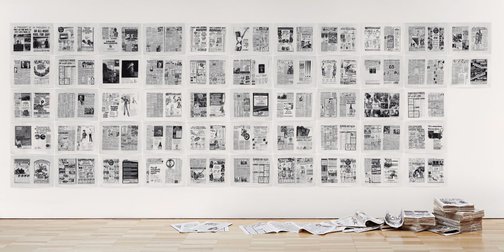 In the early 1990s Mathew Jones exhibited placards, sculptures, slogans and paintings that mimicked forms of political protest while considering the nuances and efficacy of sexual and identity politics in the response to AIDS. Since then his art has included a dialogue between personal experiences (paintings of the palm of his hand as a form of life diary which are also abstract canvases, paintings of the phone numbers of men he is attracted to) and more public events such as the 1969 Stonewall riots in New York, which are considered a turning point in the modern gay rights movement. Jones’ art is disciplined, even obsessive, and his approach to his subject matter suggestively oblique. His work in response to the Stonewall riots is a hand-drawn version of ‘The New York Daily News’ of 27 June 1969', the day before the Stonewall riots, taken from microfilm as the New York Public Library no longer keeps an original. It took Jones ten months to laboriously copy it by hand.

The 27 June edition of the paper was significant as it reported the funeral of gay icon Judy Garland. It was after the funeral, in the early hours of 28 June, that police raided the Stonewall Inn, a gay bar in Greenwich Village. Reacting against police brutality and years of oppression, grieving patrons fought back, overwhelming the police who had to retreat into the bar when a large crowd quickly formed outside. The paper of course reports none of these events as they had not yet happened, although with the benefit of hindsight the paper seems full of portents. The processes through which any moment in time can become historically significant seems both arbitrary and predetermined: the newspaper had the usual range of news, entertainment and advertisements that it may have had on any day of the week, yet one of these events (the premature death of an entertainer) was an unlikely catalyst to wide-ranging social, sexual and political change.

Jones’ transcription of the newspaper personalised the public record of this day by remaking its events in his own obsessive handiwork. He has presented ‘The New York Daily News on the day before the Stonewall Riot copied by hand from microfilm records’ in different forms. The AGNSW owns his original set of drawings. In 1996 he also printed and bound a limited edition book of the drawings as well as giving them a new public life by printing and reassembling 1000 copies of the newspaper from his drawings and distributing these in Manhattan’s subways, rubbish bins, galleries and streets. As Jones has said, it was ‘kind of half public art, half littering’.1 Since then he has printed stacks of this newspaper for exhibition in Melbourne and Sydney which viewers could take away with them as a memento of a day that has passed, and of the exhibition in the present moment. Through these actions Jones’ art becomes a type of public performance. It is in the intersection between private and public, between the intimate, prolonged act of artmaking and its subsequent public dissemination that Jones’ work resonates. His practice constantly reworks this almost contradictory methodology.

52 sheets (original drawings) in box, ink and texta on vellum

Browse other works by Mathew Jones