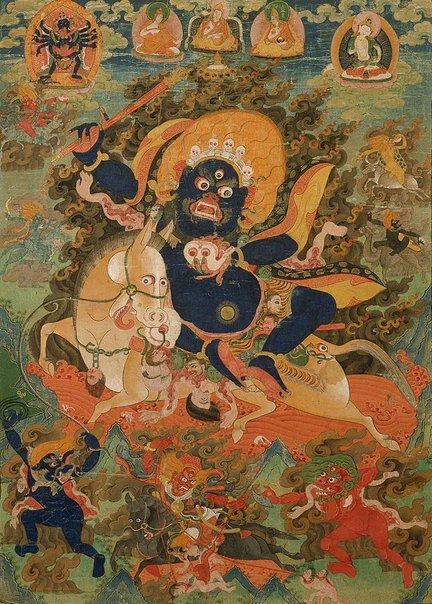 Penden Lhamo is a major protector deity and the only goddess in the group of deities known as the Dharmapala, the supporters and protectors of the teaching or dharma. A favourite deity of the Gelukpa sect, Penden Lhamo is regarded as a protector of the Dalai Lama and of the city of Lhasa. Her association with the Himalayas is apparent as she is shown riding through the peaks of this mountainous region. As a protector deity, Penden Lhamo is depicted having as wrathful demeanor, riding an untamed mule through a sea of entrails and blood. Blue-black and haggish with three bulging eyes, upturned nose, ferocious mouth and flaming hair topped by a skull crown, she holds a skull bowl filled with bleeding organs and plucked out eyeballs, and brandishes a vajra-topped club. Below, her retinue include the dakinis Makaravaktra ('crocodile-faced') who leads her mule, and Simhavaktra, the red-bodied, lion-faced deity. Surrounding her are the goddesses of the four seasons: Vasanta Devi the blue goddess of spring, Varsha Devi, the red goddess of summer, Sharad, the yellow goddess of autumn and Hemanta, the black goddess of winter. Above these deities are three Gelukpa lamas, to the proper right of this group is the deity Chakrasamvara embracing his consort Vajravarahi.

Lhamo, The Guardian Goddess of Lhasa

Palden Remati and her retinue