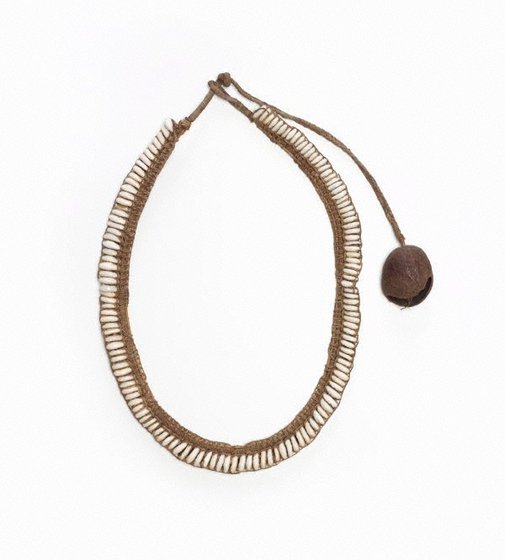 This necklace is made from cowrie shells which are mounted sideways on a vine-strand-reinforced string loop. These necklaces were worn as everyday decoration, however, when many shells were used and packed closely together on a strand, they were considered of great value. Such necklaces were then regarded as wealth items and kept safe, to be used for exchange on specific social occasions. Large and particualrly valuable examples were reserved to be worn at large events only. The front-mounted necklace on the other hand, threaded with far fewer shells, was worn more for personal adornment than as an exchange item.

The value of such necklaces has declined dramatically across all regions of the Highlands. In the past they were traded with pearl shells, pigs and other comparable valuables, the number of shells in a necklace determining its value. Cowrie shells were passed from hand to hand through exchange transactions and necklaces would be remade when the string rotted or the fine strand broke, due to the weight of the shells.

A necklace is begun by splitting and paring down a rattan vine strand for the core of the necklace. The strand is arranged with a coil of string, made up of four or more loops, and at one end the string coils are looped to form an eye. The shells are threaded by their natural clefts onto one of the loops comprising the necklace core. Each shell is secured to the coiled string and vine strand by winding a line around them between each cowrie and a length of string is then wound around the bottom of the shells to hold them firmly and reduce movement. The necklace is then finished by winding the string around the rest of the core to make an end which can be threaded and tied through the eye.

Some necklaces may be decorated by hanging objects from the back, off the eye, and could include hollow pangi seed cases and pigs' tails, small pig and marsupial bones, hard pencil cedar seeds, the claws of tree kangaroos or long-beaked echidnas, and the talons of certain large birds - especially cassowaries, common scrub hens, brown-collared brush turkeys, New Guinea eagles, wattled brush turkeys, and hawks - by boring a hole through the base of single claws by which to suspend them.

A sideways mounted cowrie necklace of average size takes over 3 hours to assemble and only men make these necklaces. In the past, all men were able to make these necklaces, however, today, only the older men have retained the knowledge and experience. As the necklaces lasted for many years, men did not make them up often, receiving most of the necklaces that passed through their hands ready-made and in good condition.