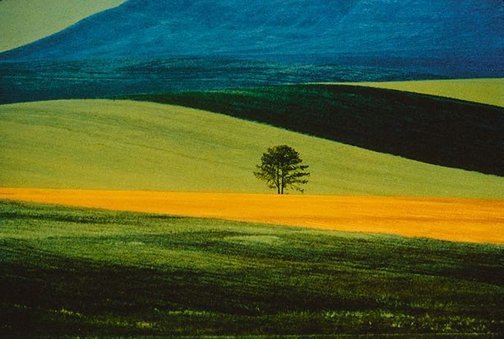 Best known for his illuminating and enigmatic colour photographs of the landscape that reduce nature into linear elements, Franco Fontana’s abstractions of the land and urban-scapes form what he calls ‘harmonic wholes’. His extensive portfolio of nudes, landscapes, urban-scapes and experimentations with the Polaroid image all play with the illusive line between reality and unreality. A contemporary of Diane Arbus and Ralph Gibson he was included with them in the ‘Photographie als kunst 1879–1979’; ‘Kunst als photographie 1949–1979’ exhibition in Vienna which explored photography as art. It was his intense coloured landscapes from the 1970s that defined his oeuvre, using geometry as a process to abstract nature and the ‘line’ as a basic and intrinsic conceptual device in the composition.

Fontana’s attempts to isolate, in space and time, the abstracted details of the Italian landscape can be seen in this image in which the topographical elements are reduced through an intensification of colour to layered horizontal bands. This reductive approach extracts only the essential elements heightened by the colours and contrasts that are increased by overexposing the film. The omission of the horizon, the tight cropping of the components that, whether vertical or horizontal, are visually squeezed into the frame adding to the tension, has much in common with Grant Mudford or the work of objective photographers such as Robert Petschow, Walker Evans or Imogen Cunningham. ‘Landscape’ is a typical image from Fontana in which the intense colours constantly roll into one other, occasionally crashing up against an element that throws the eye into recognition of the natural representation and reveals his interest in the violence of the image.

Browse other works by Franco Fontana