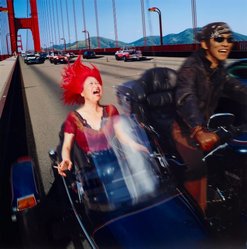 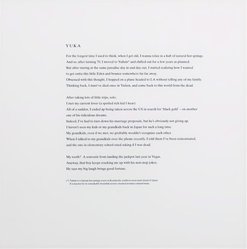 Miwa Yanagi is an artist known for her photographic works depicting women of various ages, from children to the elderly, in fantasy scenarios. Yanagi’s subjects are often larger than life either in scale or scope and recall dream sequences that vacillate between the disturbing, uncanny and ecstatic. Yanagi works in colour and black-and-white still photography as well as with moving image and performance. The worlds she creates with her photographs, though sometimes surreal, comment on real-world issues around topics such as femininity, consumerism and aging. Yanagi sees her series ‘My grandmothers’ as a lifework, which has continued to evolve since its beginning in 1999. 1 Each grandmother represents the imaginings of various individuals of how they will be when they are ‘old’, in fifty years from now. Those interviewed include both women and men, with ages spanning from eleven to mid-forties, however all are depicted as ‘grandmothers’ in the final image. The scenarios played out and accompanying texts are constructed through ongoing dialogue between subject and artist so that every element in the image fits with the imagined story of that particular ‘grandmother’.

For ‘Yuka’, Yanagi shows a woman sitting in a motorcycle sidecar beside a young male driver, she is smoking a cigarette and her flaming red hair flies behind her as she screams with joy, a diamond tooth glinting in the sun as they cross the Golden Gate bridge in San Francisco. As the text to the work explains: ‘I hopped on a plane headed to LA without telling any of my family ... After taking lots of little trips, solo, I met my current lover (a spoiled rich kid I hear) ... I ended up being taken across the US ... I’ve had to turn down marriage proposals, but he’s obviously not giving up ... My grandkids, even if we met, we probably wouldn’t recognise each other ... Anyway, that boy keeps cracking me up with his non-stop jokes. He says my big laugh brings good fortune.’

Yanagi’s grandmothers reveal the various and idiosyncratic perspectives individuals have on aging, by showing their dreams and fears through a work of plausible fantasy. She toys with our assumptions about age and the supposedly linear process of aging and, by extension, provides an at once humorous and sobering comment on existence.

Browse other works by Miwa Yanagi