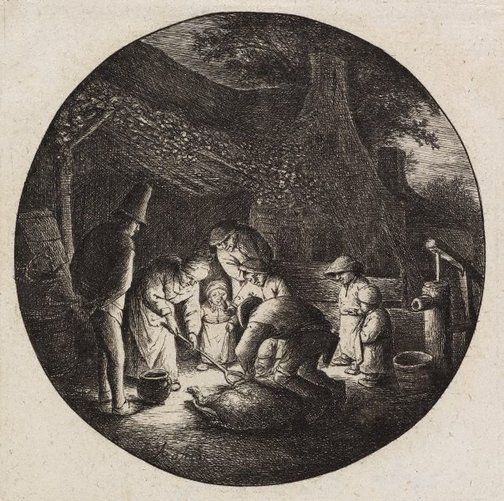 Van Ostade is thought to have been a pupil of the great Dutch painter Frans Hals, but his paintings show no signs of the latter’s influence. With his brother Isaac, van Ostade became the main exponent of paintings of low-life genre and peasants, spending his prolific career in Haarlem, where subjects of this type were a particular specialty. He was also a talented printmaker, regarded by his contemporaries and later generations as second only to Rembrandt for his 50 etchings, which remained enduringly popular long after his death and went through a number of editions.

The 50 prints – of which only ten bear dates between 1647 and 1679 – invariably depict rustic villagers inside their cottages, in taverns, or in the outdoors engaged in various everyday activities. The pig killers is one of van Ostade’s most striking, both for its circular format and unusual lighting. Pictorial representations of pig slaughtering were known in medieval book illumination where they were incorporated into depictions of activities relating to the month of November or December. In this intimate, nocturnal scene, illuminated by torchlight, van Ostade combines coarse, barnyard realism with tender observation as a peasant family gathers round to witness the slaughter of a pig, which presumably will feed the large family during the long winter months. As the eldest son kneels on the animal, the farmer’s wife collects the blood in her long handled pan, and her small children look on with curiosity.