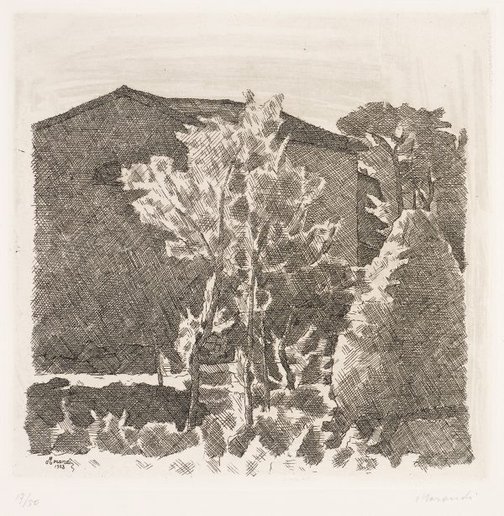 Morandi's activity as a printmaker was not a mere supplement to painting, a means of additional income for the established artist: etching played a significant part in his artistic practice from the outset. Inspired by masters of the medium, Rembrandt and Goya, whom he profoundly admired, Morandi began making prints in 1911, when still a student at the Academy of Fine Arts in Bologna.

Unfortunately, none of his earliest etchings have survived. Although entirely self-taught as a printmaker, Morandi held the Chair in Printmaking at the Academy of Fine Arts in Bologna from 1930 until 1956.

Highly methodical in his use of the etched line, Morandi created shapes, volume and space by varying the density of his marks, hatching and cross-hatching to avoid the use of a descriptive outline. The resulting system of shaded surfaces is contrasted with areas completely untouched by the needle – bianco assoluto, ‘absolute white’, as Morandi called it – creating a highly atmospheric chiaroscuro effect.

‘He painted fast but his technique as an etcher was very different. What patience, what dedication emanate from each print! The most extraordinary aspect of Morandi’s work is that, inspired by the copper, he manages to evoke by means of a steel needle the same feeling of light in his etchings as in his oil paintings. His infinitely rich gamut of greys reproduces the vibrating landscapes of Emilia, around Grizzana, with its shimmering leaves and its dappled dust on the roads – and when he depicts the frontage of a house, the surface of a road or a pond, simple by leaving the colour and texture of the paper untouched, he suggests the white heat of summer. It is probably then, in that unrelenting light, that he is most eloquent at making time stand still...His etchings have a weird kind of transparency, vibrating before nature like the works of Cézanne, whom he worshipped as his master and spiritual guide’. (Jean-Michel Folon, 1979)

Poggio in the morning

Browse other works by Giorgio Morandi 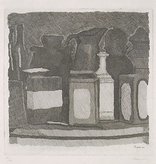 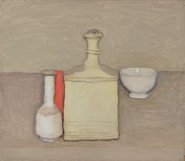