May - Yanone and June - Tenno festival 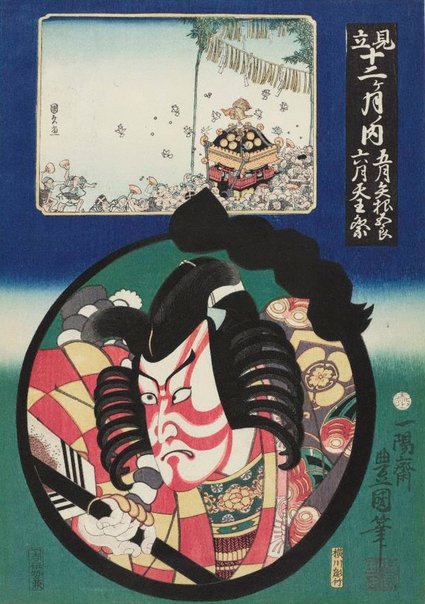 The series from which this comes from is a 'mitate' (representation) of seasons, and this print depicts May and June. The characteristic makeup of the kabuki actor is called 'kumadori', and was developed from the 17th century. The various types of 'kumadori' emphasises the movement of facial muscles, and form an integral part of 'aragoto' plays (rough stuff). The red 'kumadori' indicates strength, which was probably the reason this image was chosen to represent May, the month of the Boy's Festival.

The play, Arrow Head ('Ya-no Ne') is one of the Eighteen Plays ('Kabuki Juhachiban') which was developed around 1832 as a selection of successful kabuki classics of the Ichikawa Family actors. Some of the eighteen plays have been absorbed into other plays, but Arrow Head, like Kanjincho, is one of the most popularly played items. In the story, Soga-no Goro, a popular kabuki hero who is planning to avenge his murdered father, falls asleep while sharpening large arrow heads. His brother Juro appears in the dream, calling for help. Goro wakes up, grabs a horse and rides away to rescue his brother.

The image of the Tenno festival in the insert is signed by Utagawa Kunihisa (1832-1891). Kunihisa studied under Kunisada and married his daughter.

Browse other works by Utagawa KUNIHISA