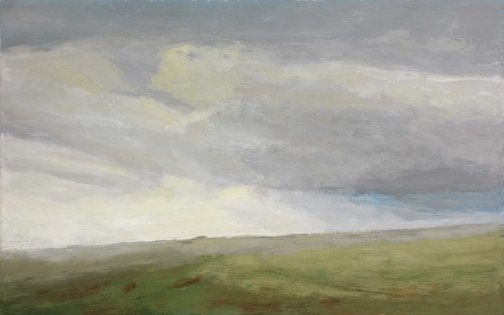 From rocky mountain ranges to lakes and rivers of captivating beauty, Australia’s only island state Tasmania is well known for its pristine wilderness environments. This terrain, particularly the central highlands, has been a great source of inspiration for Philip Wolfhagen, whose family has lived in the area for generations. Like Rosalie Gascoigne and New Zealand artist Colin McCahon, Wolfhagen expresses a deep familiarity with a particular place and a desire to represent the sombre nuances of its landscape. Importantly, however, memory as an after-effect or consequence of time passing also informs his methodology, so that a painting’s form and content evoke not only the landscape before him but also his internal consciousness. In the active exchange between the physical rudiments of the painted landscape and the artist’s mental impression of that scene, Wolfhagen’s paintings map out a personal sense of place.

At times Wolfhagen has set out to disturb the conventions of landscape painting by interrupting the picture with ‘faultlines’ which split the image in two; a deliberate attempt to produce a rupture between memory and experience. In ‘Third illusory field’, a comparatively early work, he has taken a more straightforward approach. The paint is quite thickly applied here; however the subject matter itself is characteristically pared back by a reduced tonal palette. The murky green/brown land in the foreground makes a strong horizon line against the scuffed grey/white of the clouds and gloomy blue sky. Essentially two horizontal planes dominate the work with no detail in the depiction of either land or sky. The effect is quite minimal, almost abstract, and recalls a scaled-up version of 19th-century English landscape painter John Constable’s cloud study oil sketches – a painter whom Wolfhagen notes as an important influence.

For Constable painting was feeling. His landscape paintings both symbolised a mood and attempted to realistically recreate nature with paint. Wolfhagen’s paintings illustrate related obsessions. In this way ‘Third illusory field’ portends to a deeper ambivalent sensibility, which is inferred by the title. Moving the viewer through a subtle space-time continuum, the dominant horizon line ebbs into infinity. This painting wavers beautifully between representation and abstraction, lending the work a poetic disposition as it oscillates between an appreciation of, and distance from, the landscape it depicts.

beeswax and oil on canvas