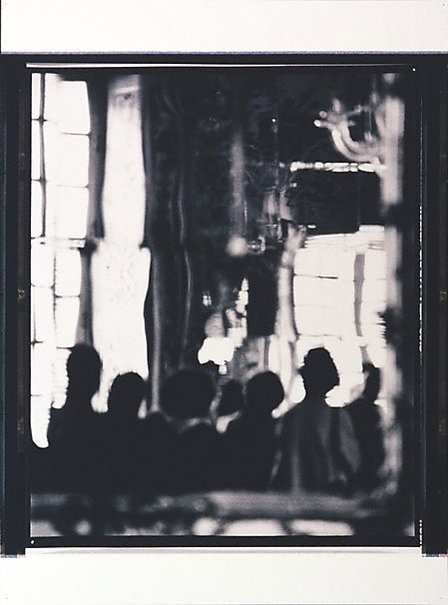 Henson produces above all a photography of expressive content. The dominant motifs in Untitled are in fact few in number: architectural details of baroque palaces, old master paintings hanging in European galleries, the female face in repose, and, most centrally, naked junkie waifs who are lost to their own degradation and suffering. Yet the sense of scope Henson brings to his subjects gives them a dramatic resonance, an existence on paper which reverberates with a kind of numinous inevitability. It has been remarked that these photographs approach the condition of film but they do so only in the way that film itself can sometimes approach the condition of painting – by imitating its textural qualities and the distortions of form it allows in the interests of integrated composition. This question is further complicated by Henson's delicate use of colour, which works by implication and suggestion, almost in fact as an illusion until we realise that those hints of blue and red and gold are heightening tonal contrasts apparently attained at first glance in black-and-white.
What ultimately registers in Untitled 1983/84 is a tone of unassuaged sadness, an operatic vision of the stuff of tragedy, made bearable only by the intricacies of the art that has fixed these shadows on paper forever. It is not an easy or a fashionable truth that suffering so absolute that its victim has lost comprehension of self can provide for an art of consummate beauty.