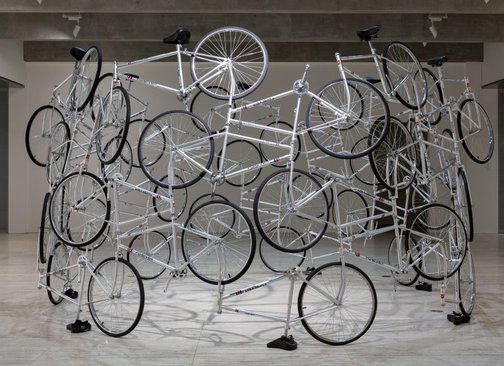 Blurring the boundaries between art and activism, Ai Weiwei’s work consistently challenges the political regime in China while still speaking to global themes. The son of a famous Chinese poet who was persecuted during the Cultural Revolution, Weiwei’s own actions have landed him in jail and subject to brutal beatings, house arrest and constant surveillance. In 2012, he won the Václav Havel Prize for Creative Dissent from the Human Rights Foundation, New York.

The sculptural re-purposing of bicycles in this work is at once innovative and disarmingly simple. This work consists of forty two Forever brand bicycles that have been dismantled and reassembled into a circular interlocking structure. The Forever brand of bicycle was produced in Shanghai in the 1940s and this company subsequently became the leading manufacturer of bicycles in China. The work inevitably references the once ubiquitous presence of bicycles on the streets of Chinese cities which are increasingly being replaced by motorcycles and cars.

At the same time, Forever attempts to ‘best’ Weiwei’s historical idol Marcel Duchamp, whose bicycle wheel readymade changed art history permanently. Weiwei’s work has been profoundly influenced by Duchamp, not only in his use of found objects but also in his predilection for provocation and iconoclasm. Weiwei sparked widespread controversy with his work 'Dropping a Han Dynasty Urn' 1995/2004 which flouted the cultural, historical and financial value of the urn itself. At once a homage to the Forever bicycle company and to Duchamp, this work marries international art historical discourse with local cultural references. Its carousel-like format also playfully raises questions about continuity and change, tradition and revolution. In rapidly changing economies, what dimensions of daily life can be expected to last ‘forever’?

Weiwei is also an accomplished designer. Art critic Jed Perl calls him “a Dadaist William Morris” who corrals many cottage industries to make his monumental works. His constructions are often equally deconstructions that reformulate ancient temple pillars or beautifully carved tables, making absurd and yet compelling mash ups. His work on the Olympic stadium in Beijing earned him international recognition, however, around the same time, government forces demolished his studio, which he had also designed.