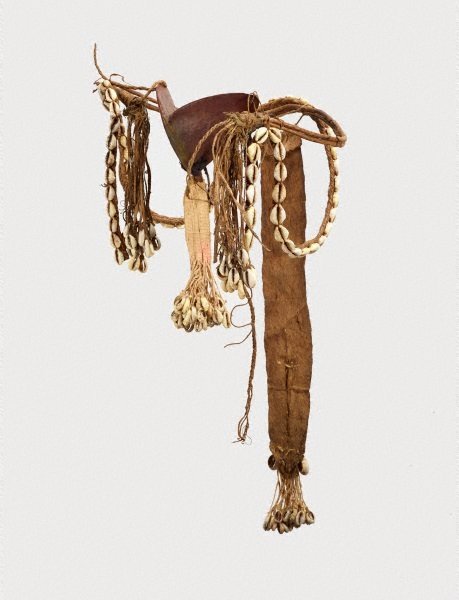 The 'kompuna' was worn across the hips and thigh and around the groin. When Australian gold prospectors first made contact with eastern highlanders in the 1930s, men across the region typically wore girdles such as these. Their form and decoration differed from group to group.

At the front of the 'kompuna' a small piece of wood is suspended, cut into the shape of what might be a butterfly with outstretched wings – as described by Michael Leahy in 1930 – or possibly a bat, which protects the groin. A long length of barkcloth with geometric patterns beaten into the surface hangs from the back, while a shorter strip is suspended from the wooden pubic cover. The entire girdle is festooned with scores of cowrie shells, once a valuable trade item across the highlands.

This 'kompuna' was made by Orgiri Tabzono of the Abaninofi Clan and was purchased by Stan Moriarty during his last journey to the highlands in 1972.

© the artist, under the endorsement of the Pacific Islands Museums Association's (PIMA) Code of Ethics