Two up, two down 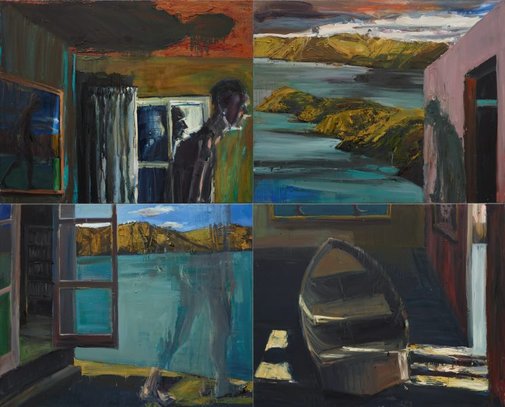 'I was thinking at one stage about that relationship with the figure and the landscape - thinking how will I do this without the figure? The obvious way was to use a metaphor for the figure. I thought "I'll use a boat". Why did I choose a boat? Because of my father on one level, and I love the shape of the boat and I love painting water. It's hard to separate it out - what's conscious, what's unconscious.' (Euan Macleod to Gavin Wilson in Surface tension, the art of Euan Macleod 1991-2009, Tweed River Art Gallery, 2010, Murwillumbah, p 7)

Euan Macleod is an established New Zealand/ Australian artist who has lived, worked and taught in Sydney since 1981. Macleod's paintings and prints characteristically feature landscapes patrolled by lonesome figures often executed from memory in an expressionistic manner. 'Two up, two down' 2004 is a large-scale four-panelled painting whose compelling coastal/domestic imagery relates to the artist's hometown of Lyttleton Harbour, New Zealand, and his eccentric boat building father who suffered from Alzheimer's disease and died in 1993. Rich in personal mythology and symbolism this picture represents a psychological as well as a literal environment, which explores the human condition and our relationship with nature.

Two up, Two down

Euan Macleod
Two up, two down

Browse other works by Euan Macleod