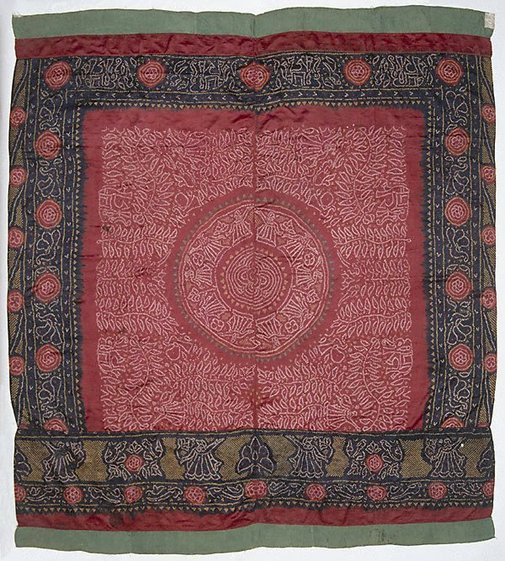 The dramatic landscape of west India is a perfect foil for the shimmering silks created through the stippled patterning of 'bandhani' tie-dyeing. Clear bright designs in auspicious reds and stark blacks predominate in these resist-dyed textiles, worn by the women of Gujarat on festive occasions. The addition of the luminous green band at each end of this textile may indicate that it was intended as a gift.

While a variety of garments are created by the tie-dyeing process, the most striking in Gujarat is the woman's headcloth ('odhni'). As in this example, the design often focuses on a central roundel of dancing female figures, each with one arm raised high above the head. Full skirts and flowing headcloth swirl as they form a circle of dancers (mandala) against the rich scarletground. At the centre is a multi-lobed form - possibly a flower or moon, ambiguous references to the Rasalila episode in the life of Krishna when, standing in the moonlight on a lotus by the river Yamuna, the god's magical presence in the midst of the encircling milkmaids (gopis) causes each gopi to imagine he dances only with her. In this rendition, the dancing figures are interspersed with the same emblem and another plant motif, probably depicting the kadamba tree, associated with the blue-skinned god.

The broad borders around four sides of the textile also contain many of the favourite motifs of the Saurashtra tie-dyed textiles. Following local custom, a wider border at one end of a headcloth also displays images of dancing women, each holding a flower in the pendant arm. Here the motifs are arranged around the central kadamba tree and interspersed with birds in branches, above a band of parrots.

The other borders enclose rows of peacocks, another symbol of Krishna, and elephants with parrots, punctuated by bright red rosettes which echo the form of the central roundel. A fourth border with elephants, inside the row of dancers, may be missing. Blocks of intricate tie-dye hatching however link the outer side patterns to the band of dancers. This 'odhni' also features a figurative field design where the same images - dancing women, birds, and elephants - are largely concealed in the leafy mango forest. [RM]