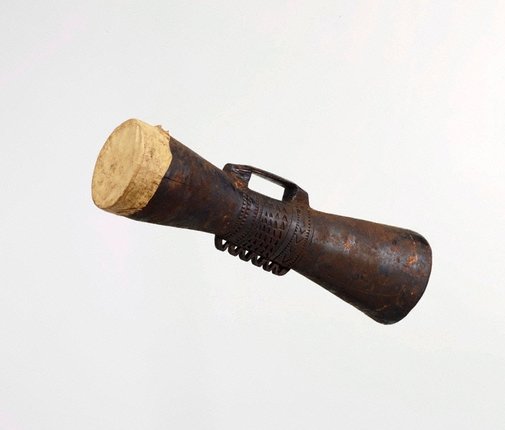 Stan Moriarty was in the Territory of Papua and New Guinea from 11 May until 6 June 1972, travelling to Port Moresby, Goroka, Lufa District, Kainantu, Mount Hagen, and to the Southern Highlands Patrol Posts at Ialabu and Kagua.

On 15 May 1972, Moriarty travelled to the district of Lufa in the company of Patrol Officer Alan McNeil, who was stationed at Lufa Patrol Post from 1971 to 1973. The following day Moriarty noted in his journal:

'Light rain all day. Went in afternoon to Kolove. Took photos of local girls in doorway of native house I had been invited in to dodge the rain. Bought a drum from the owner of the house for $4 and one of the girls explained that he had sold it to me very cheap as I had honored him in stopping in his house.'

The drum has been carved from one piece of wood and has an hourglass shape. The handle is decorated with a deeply incised design and on the opposing side there is a carved ridge with five inverted 'V' shapes through the centre. The drumhead is made from reptile skin.

© the artist, under the endorsement of the Pacific Islands Museums Association's (PIMA) Code of Ethics