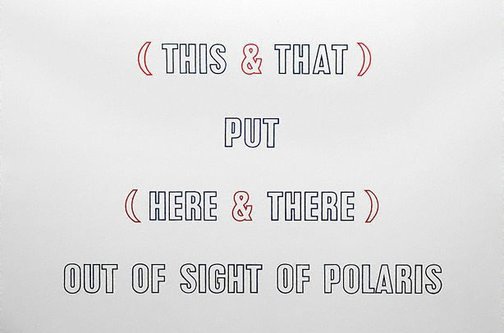 In 1967 American artist Sol LeWitt wrote an article for ‘Artforum’ titled ‘Paragraphs on conceptual art’ in which he stated, ‘In conceptual art the idea or concept is the most important aspect of the work … all the planning and decisions are made beforehand and the execution is a perfunctory affair’.1 A year later, fellow artist Lawrence Weiner took this idea to one possible extreme by abandoning the finished product altogether and presenting the concept as a written statement. The statements were offered as an art object in the form of a typed piece of paper accompanied with a ‘declaration of intent’:

1. THE ARTIST MAY CONSTRUCT THE WORK.
2. THE WORK MAY BE FABRICATED.
3. THE WORK NEED NOT BE BUILT.
EACH BEING EQUAL AND CONSISTENT WITH THE INTENT OF THE ARTIST OR THE DECISION AS TO CONDITION RESTS WITH THE RECEIVER UPON THE OCCASION OF RECEIVERSHIP.

Initially, Weiner’s statements were short descriptions of hypothetical sculptures (‘A 2 inch wide and 1 inch deep trench cut across a standard one-car driveway’, 1968) but later the lines became more ambiguous (‘With relation to the various manners of use for/of various things’, 1974). Although Weiner’s ‘declaration of intent’ could imply a lack of interest in the presentation of his work, he takes particular care with scale, colour and spacing when presenting the work himself. Using professional signwriters or constructing three-dimensional letters for more permanent works, the aesthetic look of the finished work has become increasingly important.

'(THIS AND THAT) PUT (HERE AND THERE) OUT OF SIGHT OF POLARIS’ was conceived specifically for the 8th Biennale of Sydney in 1990 and was installed under Weiner’s supervision. At the time he was planning this work, he was also working on a commission for an outdoor public sculpture in Holstebro, Denmark which read: ‘(SOME OF THIS) + (SOME OF THAT) GENTLY PLACED UNDER THE LIGHT OF POLARIS’. These two works are closely related in concept, one situated where the North Star (Polaris) is noticeably high in the sky and the other situated at the other end of the world, where the North Star is not visible at all.

In an artist’s statement printed in the biennale’s catalogue, Weiner wrote: ‘Essentially the question is whether or not a change in venue does in fact bring about a change in value. With a material moved here & there does the displacement give not only the materials but as well the assemblage another use for art within the society it finds itself functioning with. Is the placement of the object in relation to the human being the point or is the placement of the human being in relation to the object the fact?’.2 Here at the AGNSW, placed on a feature wall as we approach the contemporary collections on level 2, the text functions as a description of the international collection. Like the biennale for which the text was commissioned, the collection is indeed an assortment of things gathered from all over the world and brought here out of sight of the North Star.

dimensions variable according to wall size

Mervyn Horton Bequest Fund 1993, purchased in collaboration with the Museum of Contemporary Art