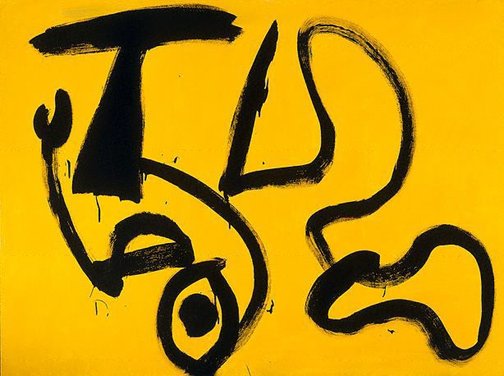 The chameleon of Australian art, Dick Watkins slips effortlessly between styles. The paintings shown here are abstract but Watkins has also produced many figurative works. For 'The field' exhibition of 1968, Watkins painted hard-edged geometric abstractions. From 1970 his work dissolved into softer, painterly dabs and splashes of colour, often with staining, before arriving at the current style of free spirited, gestural abstraction. This can be understood as an evolution but Watkins is prone to painting in a variety of ways at the same time.

In ‘5 AM’, Watkins has applied fluid, black line to a stridently yellow ground, a combination that gives the painting the arresting power of a street sign. There appears to have been little preparation; the painting looks like it was done directly and in a single, short burst of energy. The act of painting is almost visible and the viewer can sense the savagery of the initial slashing brushstrokes on the upper left-hand side. From this emphatic statement Watkins builds a cascading rhythm of big and small curves, arabesques and curlicues, punctuated by the odd dribble and accidental splash of paint. When critic Elwyn Lynn reviewed the exhibition in which ‘5 AM’ was shown, he identified the painting as a nude.1 Lynn may have been prompted by the eye-like ovoid shape at the bottom of the canvas, what appears to be a hand and the voluptuous quality of the curving lines. Watkins however does not assume any subject should be recognised: instead he relies on an emotional response to his calligraphic bravado and the ability of his ambiguous graphic dexterity to trigger associations.

Although he occasionally makes landscape drawings from nature, Watkins’ primary source of inspiration is art he has seen in person or in reproduction. His process has always been to consume and digest a range of influences from art journals, postcards and other printed material: ‘In the back of my mind, there is this clutter – this furniture – mainly Picasso and Pollock. What comes out onto the canvas is not preconceived. It is never a conscious attempt to emulate. It just happens’.2

Until the mid 1980s, Watkins’ lack of a signature style was considered a drawback in developing his career. But in the postmodern 80s, when appropriation became acknowledged as a virtue, his work was understood in positive terms. Writer and critic Paul Taylor praised Watkins for his ‘critique of the ideology of the modern artist’3 while artist Imants Tillers applauded his eclecticism, ironic stance, avoidance of conformity and flexible attitude to art history. In ‘5 AM’ Watkins’ honest and raw approach seems less concerned with irony and more with the creative potential of art. The discernible hand and eye draws attention to those of the painter in what can only be an act of faith. 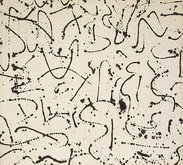 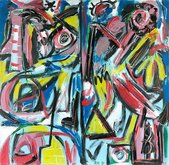 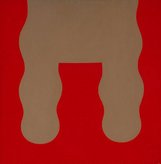 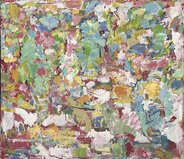