Receptacles and tools for betel chewing 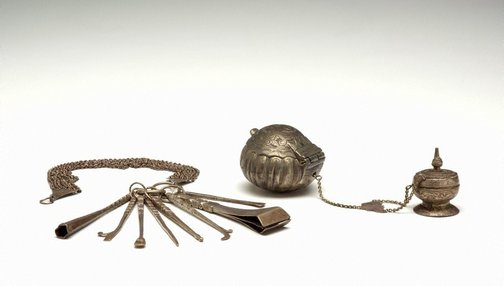 Betel nut is a natural stimulant and chewing betel was a wide spread past-time in Southeast Asia that developed a ceremonious mode of consumption and its own set of accoutrements. In Sumatra, such sets were usually made in Aceh or West Sumatra. This example has similarities with those made by the Gayo Alas people who shared some cultural characteristics with the Batak and lived on their northern borders closer to Aceh. However, the floral decoration of the rounded container which emulates the form of the mangosteen fruit indicates that this piece was most likely made by Minangkabau people of West Sumatra who were highly regarded for their metal work.

The round container would have contained areca (‘pinang’) nuts, tobacco or betel(‘sirih’) leaves and the other peaked, stupa-like container would have held slaked lime. The owner would use the array of accessories to cut, chop and prepare a combination taken from the two containers which would then rolled into a betel (‘sirih’) leaf and placed in the mouth. This set was highly portable and could be attached to a belt or piece of cloth using the chain mail that connects the set together. Engraved and embossed with intricate geometric designs and plant motifs, the silver accessories would have been worn and used as part of a luxurious display of high status.

Receptacles and tools for betel chewing