A distant view of Derry through a bank of wild flowers 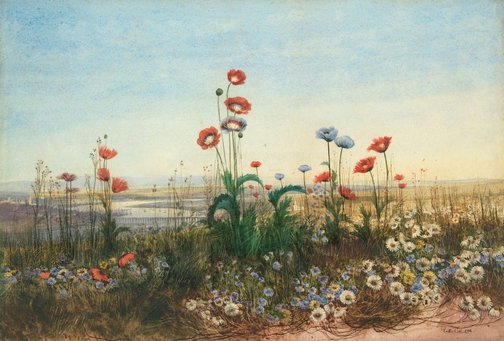 Lacking any formal training as an artist, Andrew Nicholl began his career as an apprentice in a printing firm in Belfast. His earliest paintings are scenes along the Antrim coast, and by his early twenties he had established a local reputation as a landscape painter, becoming a founder member of the Belfast Association of Artists. Among his first impotant patrons was Francis Dalzell Finlay, who promoted Nicholl’s work in Belfast, Dublin and London. Nicholl first exhibited at the Royal Academy, London, and the Royal Hibernian Academy, Dublin, in 1832. He was elected an Associate Member of the Royal Hibernian Academy in 1837, and a full member in 1860.
Around 1840 Nicholl settled in London, where he supported himself working as an art teacher. In 1846 he was appointed as a teacher of landscape painting at the Colombo Academy in Ceylon, where he remained for three years. There, under the auspices of his most important patron, the Belfast MP and Colonial Secretary James Emmerson Tennent, Nicholl produced a number of views of local scenery and also provided illustrations for Tennent’s book, 'Ceylon: and account of the island, physical, historical and topographical', published in 1860. In 1870 Queen Victoria acquired two of his watercolour views of Ceylon.
Nicholl developed a speciality of views of coastal towns in Ireland, often seen seen through a screen of wild flowers. A comparable example is 'A bank of flowers with a view of Bray, Co Wicklow' in the Ulster Museum, Belfast. Such works probably date from the 1830s when Nicholl was living in Dublin. The letters ‘RHA’ appended to the artist’s signature were probably added later, and do not necessarily mean that the the watercolours should be dated to after Nicholl was elected a full member of the Royal Hibernian Academy in 1860.
In this enchanting watercolour, the artist presents the scene from a viewpoint close to the ground, as if by a roadside, artfully juxtaposing poppies, daisies and other wild flowers with an unfolding panorma featuring the the River Foyle and the city of Derry in the distance. Without any excursions into fantasy, Nicholl fashions an image on the borderline between imagination and reality, drawing power from bothy realms. The view of Derry is dominated by the first bridge across the Foyle, built by the 4th Earl of Bristol in 1790. As well as showing a range of shipping on the river, the artist also indicates key ecclesiastical landmarks.

watercolour with pen and brown ink over pencil underdrawing