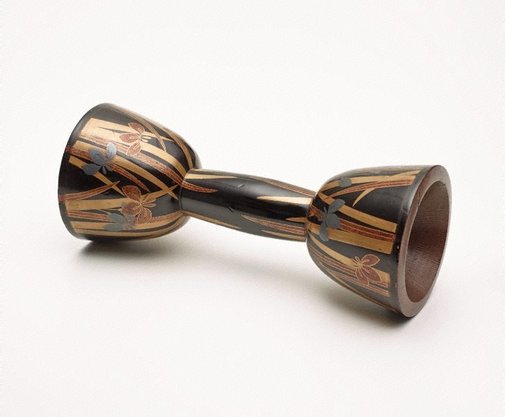 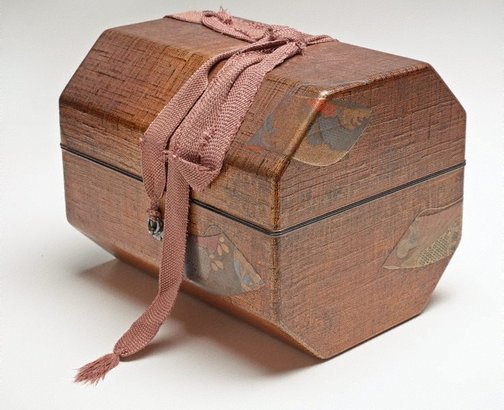 'Kotsuzumi' is the smallest among the three drums used in an ensemble of the Nō or Kabuki theatre. It consists of an hourglass-shaped, hollowed-out body made of cherry wood, two drumheads made of horsehide stretched over a metal ring. When in use, the drumheads are tied to the body with an orange hempen rope, and disassembled and stored separately when no longer needed. The instrument is held with the left hand over the right shoulder by the ropes and struck with the right hand. Depending on where the head is struck the sound varies considerably.

The elegant hourglass-shaped core of this small hand-drum ('kotsuzumi') is sumptuously decorated with stalks of blossoming water irises, 'kakitsubata'. The leaves and flowers are finely worked alternately in gold and silver 'hira-makie' and 'e-nashiji' (‘pear skin’) areas of sprinkled metal powder. Together they create a striking contrast against the shiny, polished black lacquer ground. By showing them strongly cropped at the bottom, the unknown lacquer master suggests that the border of the drum’s mouth functions as the surface of the pond from which the plants emerge.

Due to their exuberant colour and sumptuous shapes, water irises count among the most popular design motifs for Japanese lacquerware, textiles and painting. They symbolise the summer season, more specifically the 5th month. Moreover, the image of blossoming water irises is often linked to the episode called 'Eight Bridges' in chapter 9 of 'The Tales of Ise' ('Ise monogatari'), a 10th century collection of prose and poems.

In this episode, the protagonist of the 'Tales', the courtier Ariwara Narihira, travelled with a group of companions to the Eastern part of Japan on a self-imposed exile. As they reached Mikawa Province (today Shizuoka Prefecture), they came to a place called Yatsuhashi (‘Eight Bridges’). The name described the way the river fanned out into eight streams with a bridge over each one. The marsh was full of irises in magnificent bloom and this sight reminded Narihira of his plight and the woman he left behind in the capital. He composed a poignant acrostic verse wherein the first syllables of each line spell out ka-ki-tsu-ba-ta, the word for ‘iris’.

In the 15th century, this literary episode was adapted for a Nō play entitled 'Kakitsubata' (‘Water iris’), presumably by Zeami (1363-1443), the eminent actor, playwright and theorist.

This drum body with the design of irises offers itself to be used in a performance of this Nō play.

The drum is stored in a hexagonal box made of paulownias or zelkova wood and lined with chequered fabric recycled from Nō costumes. The container’s surface is decorated with design of floating kimono sleeves in relieved 'makie' technique over a golden lacquer background that reveals the rough texture of the lining cloth.

The remarkable craftsmanship and sumptuous decoration of both drum body and storage box exemplify the sophistication of the Nō theatre, in which visual delights as manifested in the costumes, masks and music instruments play an equally important role as the gripping stories and performative skills of the actors.