Headdress for a warrior (meo) 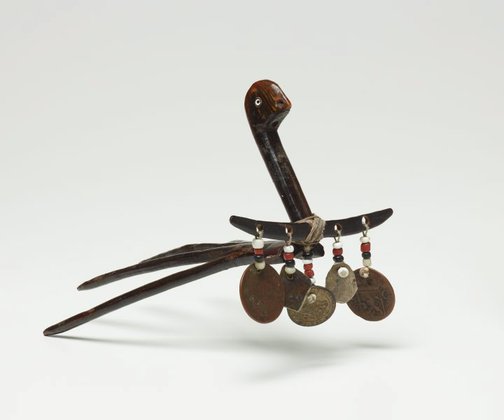 Among the Atoni of Timor, the actions of warriors and headhunters were subject to a ritualised cult of warfare governed by ‘le’u musu’, a sacred force essential to success in battle and the spiritual welfare of the entire community. Strict taboos, divination ceremonies and talismanic blessings were all believed to render warriors invulnerable to their enemies. Infused with ‘le’u musu’ prior to battle, a warrior’s regalia of fine textiles, adornments and weapons expressed the wearer’s courage and glory.This pronged headdress would have been worn to the side or front of the head, the precious beads, metal discs and coins displayed prominently to dazzle enemies and demonstrate the wearer’s success, status and wealth. The combination of avian imagery emerging from a crescent-shaped form may refer, respectively, to the upper world and its winged messengers,and the moon and buffalo, both of which are associated with fertility.

Comb in form of bird with stand

Comb in form of bird

Comb/headress in form of bird

Headdress for a warrior (meo)