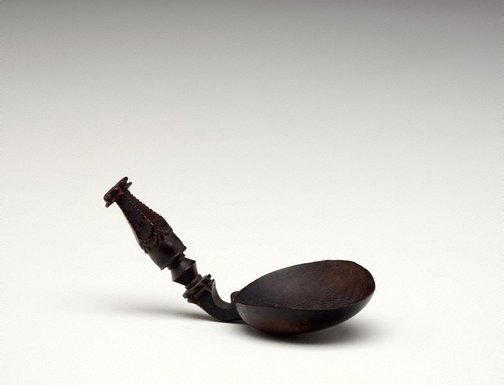 Across Indonesia the ivory of animals, including elephants, sea mammals, buffalo, deer and cattle, was sourced locally and imported as part of the extensive trade networks operating throughout the archipelago and the wider South and Southeast Asian region. Prized for their monetary value and decorative qualities, and believed by many societies to possess powerful animistic properties, the horns, teeth and bone from such creatures were popular materials for ceremonial objects and items denoting status. On Timor domesticated buffalo and cattle served as an important economic asset but were also necessary for ritual sacrifices associated with purification, renewal and fertility. The horns of large creatures were often used to
carve intricate spoons which were most likely used for large ceremonial feasts and offerings to ancestors.