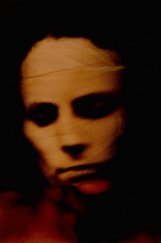 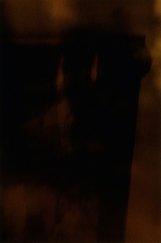 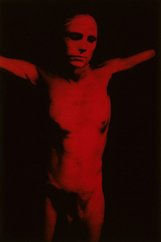 Dennis Del Favero first showed his multimedia artworks at the AGNSW in 1985, when we also acquired ‘Quegli ultimi momenti’ (those last moments) 1984. Subsequently in 1987 we showed ‘Linea di fuoco’ (a line of fire) and in 1990, ‘Diario per una vita nuova’ (diary for a new life). All three works entailed Del Favero collaborating with Sydney’s Italian community, in particular a group known as Filef (Italian federation of migrant workers and their families). These installations were shown under the umbrella of the annual Carnivale festival, emphasising his commitment to a multicultural agenda and in particular to working through his own family origins. The underlying context for these early works was the history of European violence as experienced by his family, who lived in Italy during World War II. Particularly in Italy where the conflict between fascist sympathisers and leftists who offered resistance was especially bitter, the war tore families apart. Images of terrible public vengeance extracted from Mussolini himself cast a dark shadow over this cultural history.

In his most recent works, Del Favero continues to explore traumatic social ruptures but not necessarily limiting the focus to Italian history. During the 1990s he turned his attention to Bosnia, where horrific images of a society tearing itself apart were flashed daily to the world via television. Increasingly, however, he examines these historical events through the personal and sexual encounters of individual protagonists. There is an almost unbearable melancholy to his video installations, which is conveyed in part by the heavily shadowed scenes that sometimes threaten to overwhelm and then dissolve the figures. War then becomes an extension of the inability of people to empathise and provides the background against which atrocities become possible.

‘La linea sfumata’ (the blurred line) was acquired by the gallery in 1993 and was included in the exhibition Body in 1997. It is a large-scale photographic triptych and as the title implies, it is another heavily shaded work. At first sight it seems to be a religious triptych with a figure of the crucified Christ, a Madonna and a third virtually occluded form. The figures are not whole and what appears to be a crucified male emerging from the blackness turns out to be neither male nor female. The boundaries of identity have been broken open; masculine and feminine aspects are separated and then forced together to create an incomplete and disturbing amalgam. The same applies to the Madonna’s head, which, dissolving before our eyes, is barely held together by a thin veil of flesh.

Del Favero appears to have merged images of himself and his partner in a fatally flawed attempt to find the missing ‘other’ described as the human condition by the Athenian philosopher Alcibiades in Plato’s ‘Symposium’, where he tells Socrates the myth of an original whole human being ripped apart by jealous gods and condemned to spend life searching for the other half. Del Favero is also describing how modern Australian men often suppress their feminine side, thereby leaving themselves incomplete beings whose ability to empathise is dangerously diminished.