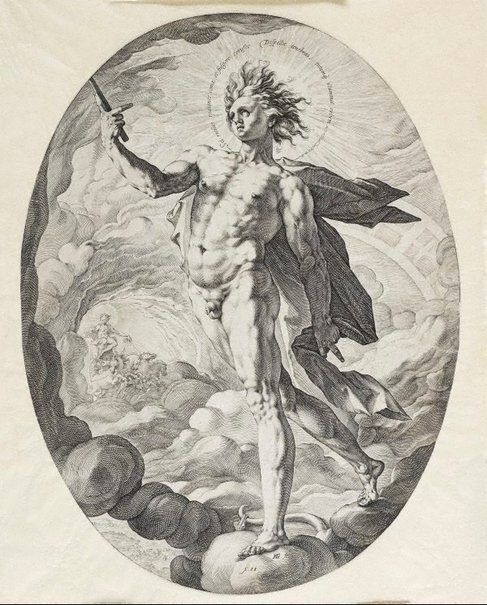 Goltzius' was the greatest engraver after Albrecht Dürer. In the 1570s he was apprenticed to the engraver Dirck Volkertsz. Coornhert. His first prints were published in Antwerp by Philip Galle and much of his work involved reproducing the designs of other artists in a rater anonymous style. By the time he was twenty-one, however, his virtuosity revealed itself in a series of remarkable miniature portraits. Soon after, he enjoyed an international reputation with a series of prints influenced by Bartholomeus Spranger and Cornelis van Haarlem, with whom he founded an academy in Haarlem in 1583.

Goltzius' prints exemplify the hyperelegant style of late mannerism, depicting male figures of bombastic musculature and female nudes of serpentine grace. His distinctive engraving style is based on swaying lines that swell and taper, as seen in the print of Apollo presented here: "His tapering curves intersect in lozenges that wrap like a fancy stocking around a wrestler's muscles", is how the print historian A. Hyatt Mayor described the technique.

"The halo-like inscription identifies Apollo as the god of the sun and of light who dispels darkness on earth. By the graceful stride and the harp at his feet, Apollo is shown to be the patron of the arts. This engraving, which was executed during the artist's 30th year, is perhaps an idealistic self-assessment." (Strauss no. 263)