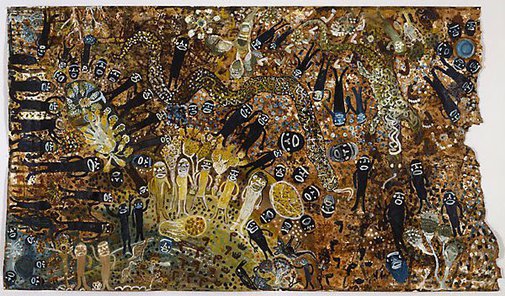 Dr Pantjiti Mary McLean's paintings are infused with the vibrancy, life and bounty of her country, Ngaatjatjarra land in the central deserts of Australia. 'Hunting Grounds', 1993, depicts walku (the ripe quandong fruit), the ripples on the surface of the waterholes, the scampering of the nyintaka (goanna) and the laughter and song of her people. Wira (carved wooden dishes) of gathered bush foods and blooming flowers cover the surface and surround the lively subjects. The aerial view of this idyllic group adds a charmed dimension to the uniquely stylised figures that are the artist's hallmark.

Pantitji now resides at the Ninga Mia community in Kalgoorlie, Western Australia. She began painting in her fifties, usually producing paintings in a methodical, Western Desert 'dot painting' style and quandong root pokerwork artefacts. In the early 1990s, Pantitji was encouraged by fellow artist, Nalda Searles, during a two-year public art project, to further develop her own style. She takes great joy in producing her anecdotal paintings of the day-to-day narratives of her childhood in her grandmother's country, Kaltukutjara (Docker River) in the Northern Territory, and her father's country, around Papalungkuta (Blackstone) in Western Australia.

To make her paintings, Pantitji lays paper or canvas on the ground and sits and paints from various points around it and on it, creating a multi-directional composition. No specific character or element is isolated, or described as having greater significance than another. Everybody and everything plays an important role in this artist's stories.

Pantitji's paintings of daily activities include the human and animal tracks that cross the same plane, seamlessly merging the past and the present. Her 'borderless' pictures are imbued with a sense of great wellbeing and of the continuation and harmony of the life cycle.

Pantitji's significance as a contemporary artist is enhanced by her roles as a mother, a respected elder and a community educator, for which she was awarded an Honorary Doctorate of Letters from the Curtin University of Technology, Perth, in 2001. Pantitji's distinctive paintings are alive with optimistic symbols of the shifting relationship between art and country, and give us a privileged insight into traditional Aboriginal beliefs in a modern context.