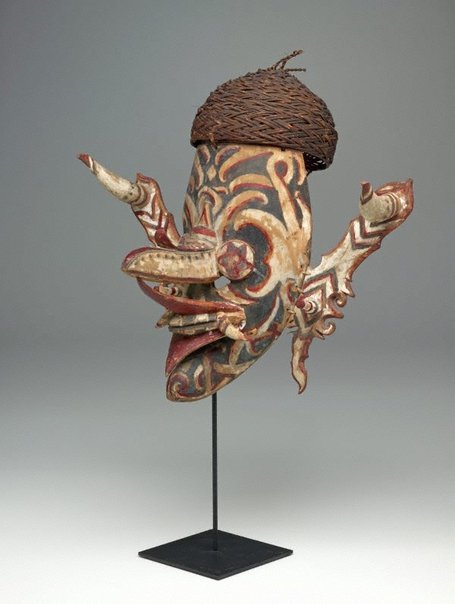 "Hudoq’ masks like this exceptional example were made and worn by the Bahau and Busang people of Central Borneo to channel rice deities and
ancestors during key moments of the rice life cycle. Cloaked entirely in swathes of banana or ‘pinang’ leaves, the male wearer of the effigy, with
its distinctive protruding nose and chin, and bared lips exposing fierce teeth and fangs, would have been transformed into a manifestation of the deity Naling Ledang. Along with three other deities – Miyoq Laang, Hiraang Lejau Midaang and Ding Durung – Naling Ledang is believed to descend
from the heavenly realm of Apu Lagaan to bless and protect crops, ensure that rice paddy spirits are appropriately appeased, and bestow fertility on women.

Ornamented with distinctive red, white and black scrollwork, the mask retains its characteristic wing-like ears, a woven rattan cap and the hornlike earplugs worn by men throughout the region. In addition to these striking accessories, the mask would have been adorned with pendulous
ear ornaments and large black and white hornbill feathers.