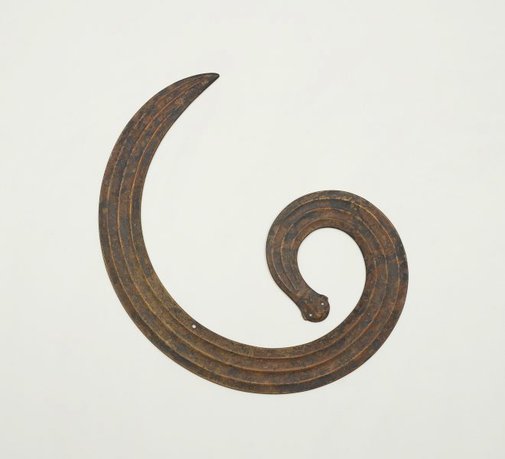 Found throughout Central, North and Southeast Sulawesi, ‘sanggori’ ornaments are believed to have been manufactured in Central Sulawesi until a decline in metalworking knowledge in the 1900s. This elaborate ‘sanggori’ features a small head at the centre of the ridged spiral lending the appearance of a snake or eel. While it is generally agreed that the ‘sanggori’ refers to a serpentine creature (associated with the underworld, protection and fertility), it is possible that the metal form is based on the coiled tusks of native deer-pigs (‘babirusa’), which are used for ornaments among groups living in northeast Central Sulawesi. ‘Sanggori’ were used among the Pamona, Kulawi and Mori people to provide protection in battle, death and during healing rites. Polished to a high sheen, and with the tails pointing upwards, they were attached to the front of the headdresses of male warriors. It was believed that the form and its dazzling glow would hinder enemies and provide magical protection. After death, the ‘sanggori’ was attached in a similar fashion to the funerary effigies of male warriors used in secondary burial practices. As an aid in healing rites, the ‘sanggori’ was placed horizontally on the crown of a patient’s head and also worn in the manner of a warrior by shamanic practitioners.

Head ornament (sanggori) in the shape of a snake