The dragon devouring the companions of Cadmus 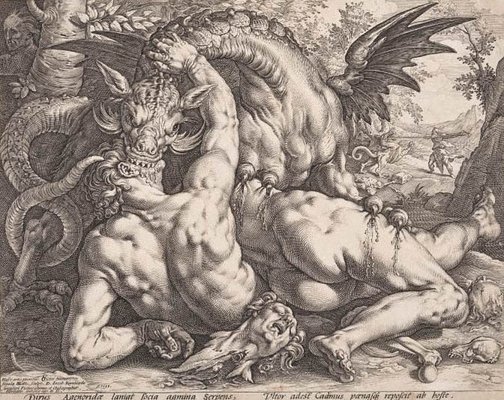 Goltzius was the greatest exponent of Dutch Mannerism, renowned in the Netherlands and elsewhere for his technical skill and virtuosity. This gruesome scene was inspired by the story of Cadmus in Ovid’s ‘Metamorphoses’. Cadmus was sent by the Delphic Oracle to follow a cow and build a city at the first place it decided to lie down. The cow eventually collapsed at the future site of Thebes. When Cadmus sent his men to fetch water, they were killed by a dragon guarding the spring. Cadmus then slew the dragon, as seen in the background. On the advice of the goddess Athena he sowed the dragon’s teeth in the soil, from which armed men sprung up. Five of them became the ancestors of the Thebans.

Hendrick Goltzius , after Cornelis van Haarlem
The dragon devouring the companions of Cadmus