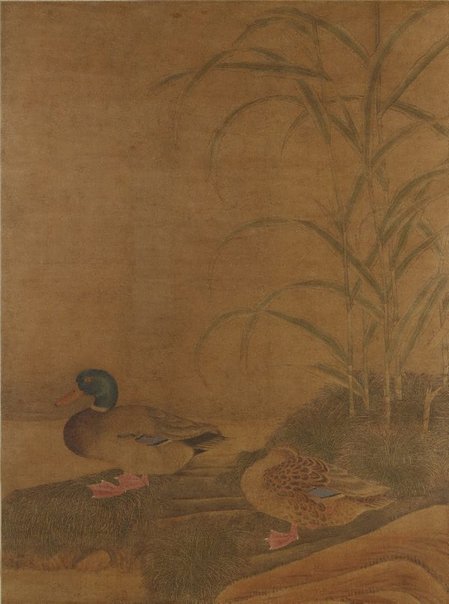 The scroll depicts a pair of ducks on a bank, next to a cluster of reeds. The painting is realistic, revealing the most painstaking observation. The technique consists of careful, fine-line drawings of outlines followed by shading and colour. The setting is one of a secluded sanctuary, evoking a feeling of the inviolability of wild life in its natural habitat.

On the basis of its style, brushwork and colouring, the painting is dated by Japanese scholars to the Yuan dynasty (1279-1368). It reflects the style of precise, accurate realism and colourful presentation that became the standard of the Song dynasty (960-1279) and of the Academy School of the time for over a century. The colourful and sensuous manner was created by two renowned painters, Huang Quan (903-968) and Xu Xi (died before 975), during the tenth century, but evolved among their followers and remained popular through later periods.

Purchased with assistance from the David Jones Fund 2010