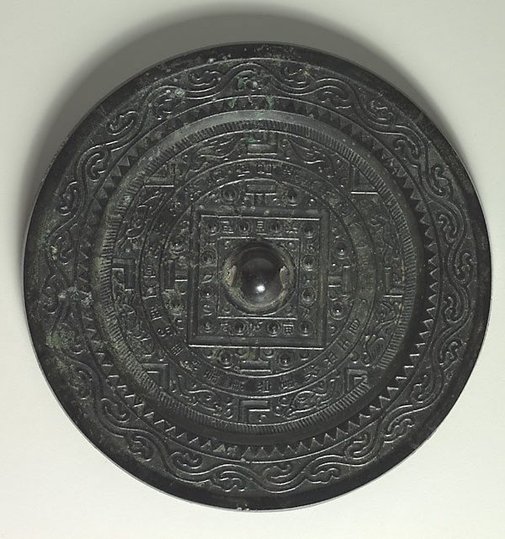 The motifs on the mirror are composed with concentric circles of geometric and mythical animal designs, Chinese characters and TLV-shaped signs. In the middle of the mirror is a square containing twelve small bosses interspersed with the characters of the twelve earth branches of the Chinese Zodiac.

Bronze mirrors were often made as guides for the soul in the afterworld. Within Chinese tradition, the square within the circle depicted the round heaven and square earth. In this divided universe, the Four Spirits - Azure Dragon, White Tiger, Red Bird, and Black Tortoise - command the cardinal directions, seasons, elements, or forces, as well as a spectrum of outer and inner virtues.

The Azure Dragon represents the East, the wood element and the Yang masculine force. The TLV-shaped signs are borrowed from the 'Liu Bo' game popular during the Qin and Han dynasties and played by males during ritual ceremonies.