Landscape with the parable of the blind leading the blind 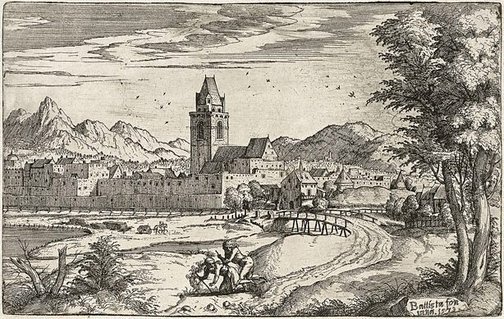 Fontana was born in Verona and formed his style on the example of the Venetian masters – Titian, Veronese, and Giulio and Domenico Campagnola. He worked mainly in Austria (with his artist brother Giulio Fontana) executing frescos, altarpieces, drawings and prints, the last of which helped to spread an awareness of the Venetian landscape tradition across Europe. Fontana was also one of the early practitioners of etching before the technique became more widespread with creative printmakers in the following century.

Landscape with the parable of the blind leading the blind is one of a series of eight landscapes depicting the life and parables of Christ. This parable, which is mentioned in brief passages in the gospels of Luke (6:39–40) and Matthew (15:13–14), is illustrated in the foreground of the print, where two men are shown tumbling into a ditch. Despite the large walled town with a clearly defined church tower, and windows like hundreds of eyes, and notwithstanding the clear path, the allegorical blind cannot find their way. By contrast, a man leads two horses taking timber from an orderly stack.

The allegorical meaning of the print is, however, secondary to Fontana’s interest in evoking a humanistic vision of nature, which appears to have existed since time immemorial and to have sustained its human inhabitants through the centuries. Our eye is drawn into a sweeping vista replete with buildings and bridges, meandering roads, waterways, hillocks and distant mountains.