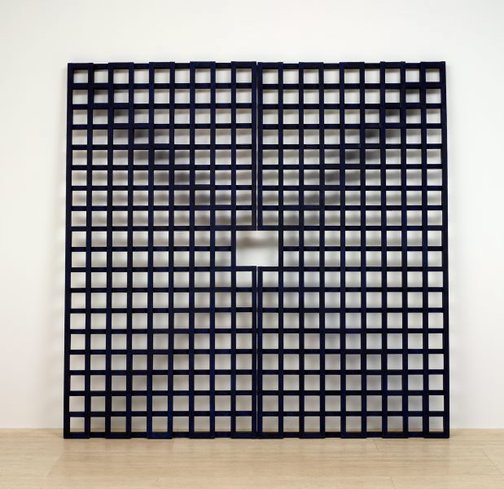 When critic Rosalind Krauss noted that ‘the grid is an emblem of modernity … it is what art looks like when it turns its back on nature’, she described the essence of Hilarie Mais’ ‘Grid: doors II’.1 Mais has devoted much of her career to exploring the grid’s potential as content and composition, a fascination derived from a confluence of interests, both professional and personal. Mais uses the grid as a contemporary and technological artefact, the symbol of the human intellect, but if this is logic, it is logic defied: her use of the grid straddles both reason and emotion.

‘Grid: doors II’ offers precision and clarity, but a profound and disorienting optical experience as well. It rests on the wall like a painting yet sits proud on the floor like sculpture. Paradoxically, the grid structure bridges wall and floor as a prop while needing support. As something between image and object, ‘Grid: doors II’ intrudes into the viewer’s space yet still exists within the sphere of illusion. The grid is solid, yet transparent – enough to allow a tantalising access while simultaneously denying passage. In this work, as the title suggests, the square grid is divided like a pair of doors, reiterating the possibility of discovery and frustration. Mais often pairs complementary parts, as in ‘bearing effigy’ 1994 (AGNSW collection), to effect a powerful symbolism of partnership, of mirror and reflection and of indivisible relationships.

Interviewed in 2002, Mais stated that ‘my work about the grid, referring to doors, windows, screens, implying passage, crossing, journey, the threshold to the other side, both physically and meta-physically, elements occurring in much religious art and architecture. Also the issue of the temporal zone, the other side, inner-life, the life of the spirit, the female place, the inner sanctum. The veil or barrier to inner knowledge ('sanctum sanctorum'), these are all moments of revelation; these I see as spiritual states’.2

Mais does not have her sculptures fabricated but rather constructs them herself, fitting the parts together visually so that they have a handmade look rather than a machine aesthetic. Each grid square is ‘Vitruvian’, in that it is based on the dimensions of her body and outstretched arms, and, mirroring her proportions, is thus a reflection of self. Mais complements the craft approach in her construction with a painterly attitude to colour, staining the wood with pigment, layer by layer, until the right blue/black hue has been achieved. Secondary layers in ‘Grid: doors II’ cause it to cast a shadow in the form of an ‘x’, as if the ghost of the artist still lurks in the grid. Rack, prison, portcullis, door, map: the grid as matrix for the projection of shadow brings together the real and the imagined.

Browse other works by Hilarie Mais 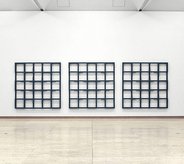