The six portfolios of photographs that make up ‘Aktionen Wien’ represent almost the entire artistic output left by the Austrian artist Rudolf Schwarzkogler, who committed suicide in 1969 at the age of 29 following a gradual deterioration of his mental health. The photographs of these six actions were to become highly influential to later artists.

While closely associated with the group of Austrian artists who became known as the Vienna Aktionists, principally Hermann Nitsch, Günter Brus and Otto Mühl, Schwarzkogler’s work differed in one important aspect: the Vienna Aktionists’ performances were highly ritualistic public actions, designed to be confronting and cathartic experiences for both performers and audience. However, with the exception of ‘1. Aktion ‘Hochzeit’ (marriage) 6 Februar 1965’, Schwarzkogler’s actions were staged primarily for the camera. Schwarzkogler used his collaborator, Heinz Cibulka, more as a passive prop than as an active participant, wrapping him in bandages and subjecting him to implied mutilation by knives or syringes.

Some of Schwarzkogler’s contemporaries criticised his ‘staged’ actions as a return to pictorial illusionism, an artifice that live actions were supposed to have eliminated. Schwarzkogler did not limit himself to direct action or endurance in the manner of Marina Abramovic or Mike Parr but developed theatrical scenarios that, in their linear documentation, can be read as narratives. Hermann Nitsch, however, believed that Schwarzkogler’s work was a development that pushed the boundaries of Aktionism to create what he called ‘living pictures’. Whereas many performance works were hastily documented and by their nature were unrepeatable, Schwarzkogler planned his performances and acted them out before the camera: they were primarily staged and repeatable events as opposed to duration works that tested bodily limits. Many of Nitsch’s actions – for example, slicing open an animal carcass and letting its blood and entrails fall onto a naked human body – were intended to create an atmosphere of shock and chaos that was essentially nihilistic. Schwarzkogler, on the other hand, was inspired by his abiding interest in esoteric philosophies and developed a more subtle use of symbolism within his actions.

Conscious of Carl Jung’s theories of archetypal symbolism, Schwarzkogler’s recurring images of a man with his head, penis or whole body bandaged, juxtaposed with images of dead fish being sliced open or dead chickens dangling between his legs, are all open to various interpretations. In the later actions his symbolism became more personal, exploring psychological states, and were open to wider interpretations than the more obvious alchemical symbolism of the first action ‘Aktion ‘Hochzeit’ (marriage) 6 Februar 1965’.

Browse other works by Rudolf Schwarzkogler 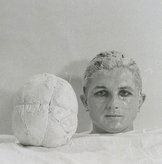