Home comforts in the tunnels, Hill 60 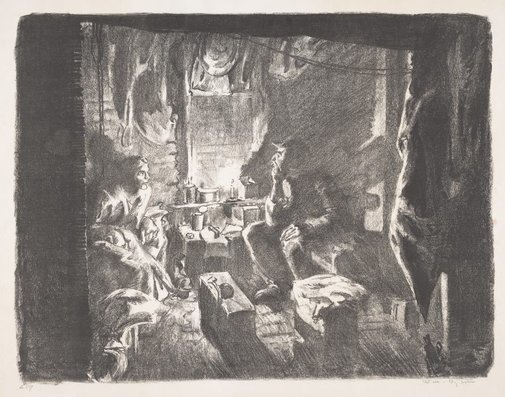 Will Dyson
Home comforts in the tunnels, Hill 60

Will Dyson, Australia at war: a winter record, 'In the Tunnel—Hill 60.', London, 1918, 42, 43 (illus.). Includes an illustration of the original drawing that was to lead to this lithograph as well as the following excerpt by Dyson: "In the Tunnel–Hill 60. “. . . . the companies staging in the tunnels were resting in every conceivable attitude of weariness in slush that was everywhere, and everywhere rising higher. The circumstances were bearable to what they would be in the line, but fatigue even here, to the unlucky forced to spend a night in the bad spots of the tunnels, is a circumstance the aching misery of which cannot be judged by any standard with which our average civilian is conversant. Fatigue at its worst is to the most articulate of our generation the least familiar of humanity’s woes, but here in this world it is about us again with the torturing insistence of the troglodyte past – one of the commonplaces of the Stone Age with which war and the wonders of science have familiarised us. . . . The brutish weariness of our earliest hairy forbear, trembling in the savage morasses of an unfamiliar planet, is the daily lot of men like these – shopmen, men from the forge and factory and mine – heirs to all the amenities of the ages. It is part of the supremacy in suffering of the inarticulate infantry. Fatigue, actual brutish and insensate, is borne by them to a pitch at which mules might be heart-broken. Dull, undecorative heroism it is – that of these men of the ‘S ––’. “But the poor fabric of military glory is woven of such – of trials that seem to break down the proud partitions which separate our lot from that of the animals. . . . These heroes of ours, alas, are unsupported by a helpful consciousness of their heroism. That joy is only for the onlooker. The tragic fact is that the incomparable heroisms of this winter warfare bring no compensations to the heroes – no element of dramatic exaltation in the performance of them. They are less swift dramatic acts than long states of siege with exhaustion as the besieger.” "