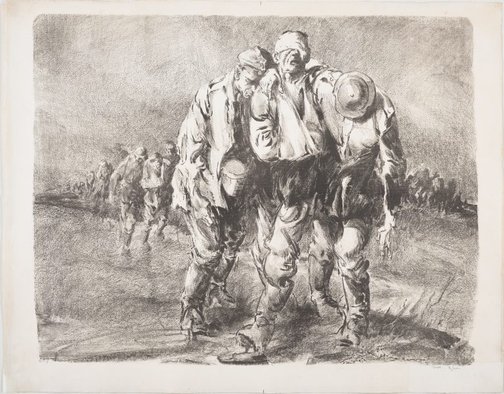 The first Australian artist to visit the front during World War I, Will Dyson witnessed the carnage of the 3rd Battle of Ypres in Belgium. Launched on 31 July 1917, over 550 000 Allied and German soldiers were killed in this battle.

In this poignant and powerful anti-war image, three horrifically wounded German soldiers stumble across the desolate landscape. The central figure, blinded and with a heavily-bandaged arm, is barely supported by his exhausted companions. Unlike much war propaganda designed to fuel public anger by portraying Germans as inhuman and monstrous, Dyson's depiction offers a compassionate vision of the enemy.

Will Dyson
Wine of Victory (Wounded German prisoners near Ypres)

Will Dyson., Australia at war: a winter record, 'Lightly Wounded at a Menin Road Dressing Station.', London, 1918, 36. Published as an excerpt that Dyson retrieved from his notes: “Lightly Wounded at a Menin Road Dressing Station “. . . . A brush had been passed over all the faces of these wounded, wiping out differences of expression, of character and intelligence; leaving them with something of the facial sameness that we see in different races of a different colour. I suppose it is the suffering and strain, common to them all, which gives them this one-ness of look, the same strain, the same relief, the same apathy, the same unquestioning collapse into the hands of the medicine men.” ”