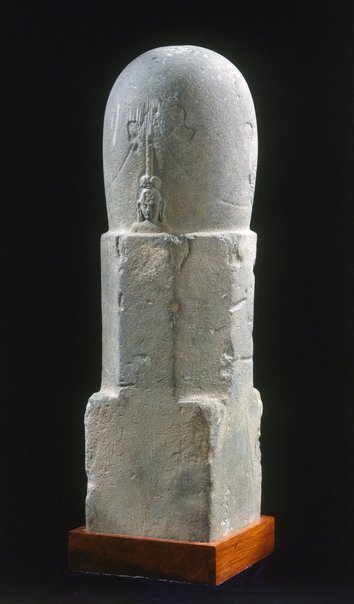 The 'linga', the most sacred form of the powerful god Shiva, is composed of three parts: the square lower section, usually embedded in the earth, is associated with Brahma, the Creator; the octagonal mid-section, embedded within a seat or plinth known as the 'yoni', is associated with Vishnu, the Preserver; and the domed, cylindrical upper section is associated with Shiva, the Destroyer. This tripartite form symbolises the principle of transmigration ('samsara'): that all living beings are thought to exist within an eternal cycle of creation, preservation and dissolution, which continues throughout eternity.

This piece attests to the importance of Shaivism in Southeast Asia, where Shiva was the tutelary deity ('ishtadevata') of Jayavarman II, who in 802 CE established the Khmer empire. The 'linga' became the sacred icon of Jayavarman II's kingdom and through the cult of 'linga' worship consolidated the notion of the king as a 'devaraja' ('god-king').