At daylight the miserable man got carried to an oak 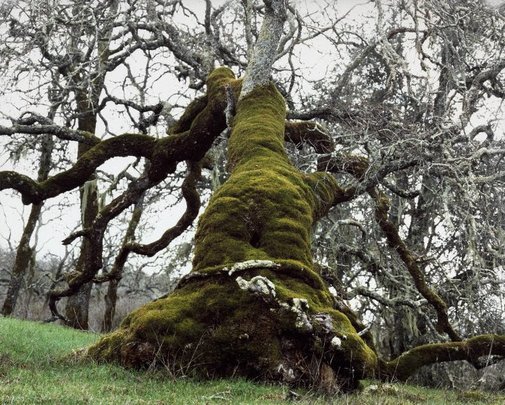 Ken Gonzales-Day graduated MFA from UC Irvine and MA in Art History from Hunter College (CUNY). He was a fellow in the Whitney Museum’s Independent Study Program. Other fellowships include the Rockefeller Foundation, and the Smithsonian Institution where Gonzales-Day was a Senior Fellow in Latino Studies. His book ‘Lynching in the West: 1850-1935’ was published by Duke University Press in 2006. Gonzales-Day is an Associate Professor and Chair of the Department of Art at Scripps College, and lives in Los Angeles.

The ‘Hang trees’ are an ongoing project to document those which were used for lynching. Most are in California and most are native oaks. All photographs are taken with an 8 x 10” Deardorff camera. The piercing clarity of these images is due to the use of the large format view camera which matches the magnificence of the Californian oak. Composed and framed to further dramatise these beautiful trees which were highly prized for their strength and longevity and were perfect supports for one of California’s more dismal activities Gonzales-Day treads the fine line between the pictorial and the obscene. In a sense the crisis of representation becomes the work itself (Julie Carson, Cue Art Foundation, New York, May 2006).

350 lynchings occurred in California between 1850 and 1935 and, unlike the South, the majority of these were perpetuated against Latinos, Native Americans and Asian Americans. Gonzales-Day continues to seek out the locations in order to document a history which most would prefer to forget.

Gonzales-Day’s work will be included in ‘Phantom sightings: art after the Chicano movement’ at LA County Museum of Art and North American tour 2008-09. His work has been exhibited primarily in the US since the mid 1990s.