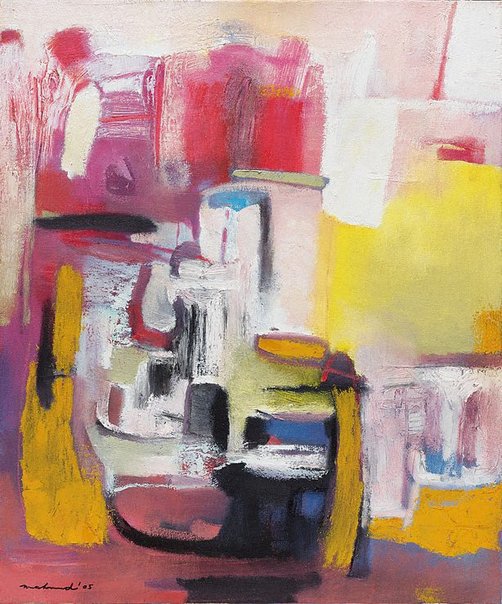 Indian independence in 1947 not only led to the partition of the subcontinent into the independent nations of India and Pakistan, but also resulted in the division of the region of Bengal in Eastern India into the predominantly Hindu West Bengal and the predominantly Muslim East Bengal. Although geographically detached from Pakistan, because of the Muslim majority, East Bengal politically came under the control of Pakistan. However, largely ignored and neglected by Pakistan, in part due to the physical separation of the two regions, the period after partition in East Bengal was marked by constant political, economic, and social upheavals against the government. The conflict finally ended in 1971, when East Bengal revolted against Pakistan authority and became the independent republic of Bangladesh.

The formation into an independent nation impacted contemporary art in Bangladesh and the 1970s saw the emergence of, what Abul Mansur describes as "A new generation of artists…who adopted a more figurative language and tried to initiate an interaction between the traditional and the contemporary." Mahmudul Haque was one among the eminent artists of this new generation.

Born in 1945 in Bagerhat, Bangladesh, Haque earned his Bachelor of Fine Arts degree from the University of Dhaka in 1968 and went on to pursue higher education in Japan. His artistic training also includes studying printmaking under the American artist Michael Ponce-de-Leon and with Shiraki Tashiyuki of Japan.

Haque's work was deeply influenced by Abstract Expressionism, which became his characteristic style. His compositions typically show bands of strongly contrasted colours and/or complementary shapes, carefully balanced and juxtaposed against each other. While his early work tended to be geometrical arrangements avoiding angular lines, his more recent work, such as this painting, adopts angular sweeps. Typical of his later works, the painting shows Haque's preference for a rich, vibrant palette. Colours work together to convey emotion and feeling.

Haque has participated in a number of prestigious exhibitions both in and outside Bangladesh, including the Asian Art Biennale, Dhaka, Bangladesh; Triennale, New Delhi, India; Contemporary Bangladesh Art Exhibition in Bonn and Munich, Germany; International Print Biennale, London; Asian Art Show, Japan; and the Contemporary Bangladesh Paintings and Print Show, Philadelphia. He has also been the recipient of a number of awards such as the Best Painting Award, Tsuchiura City, Japan 1982; Purchase Award, Lalit Kala Academy, India 1994; and second prize, Kuwait International Biennale1996. His works form a part of many private collections as well as noted museum holdings, including the National Art Gallery, Bangladesh and the Smithsonian Institute, Washington D.C. At present, Haque holds the position of Director General, Bangladesh National Museum, Dhaka.