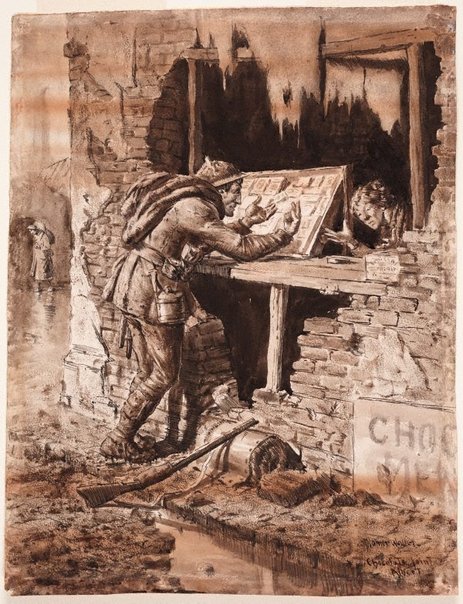 The peasant, especially the old men and women, cling to the desolated villages in Northern France, and eke out a precarious living by selling a few cheap cigarettes and chocolates to the soldiers, who are continually passing to and from the firing line. In this picture we see an 'Aussie', evidently disputing about the retail price of chocolates.
Mervyn Napier Waller, 1918

In 1918, following his return to Australia - and drawing with his left hand - Waller embarked on a series of large compositions taken directly from sketches he made on the battlefields. While the desolation of the ruined towns was often the subject of his drawings, Waller's humour and pathos emphasised the human and emotional side of military and civilian life during the conflict.

© Courtesy Trustees of the Waller Estate

Browse other works by Napier Waller

Napier WallerHowitzer Battery in action circa 19184438

Napier WallerRecapture of guns, Bullecourt circa 19185838
View all
14 works