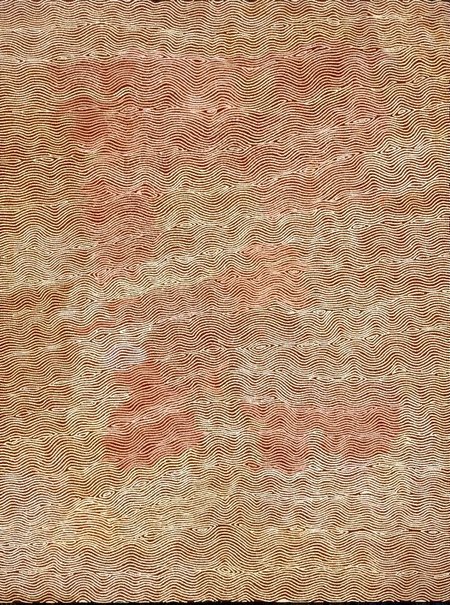 Warlimpirrnga Tjapaltjarri was one of the small party of Pintupi whose arrival in Kiwirrkura in 1984 made national headlines. Until this point, at the age of about twenty-five, Warlimpirrnga had never encountered European society. The group had been following a traditional lifestyle in the country west of Lake Mackay. After three years at Kiwirrkura, Warlimpirrnga approached Daphne Williams of Papunya Tula Artists with the request that he be allowed to paint. The other artists instructed him in the use of paint and canvas and he completed his first painting for the company in April 1987.

Warlimpirrnga Tjapaltjarri was one of the four Pintupi artists who came to Sydney for the opening of 'Papunya Tula Genesis and Genius' and helped construct the sand painting that was a feature of the exhibition.

Warlimpirrnga's first eleven paintings were exhibited in Melbourne at the Gallery Gabrielle Pizzi in 1988, the entire group being purchased by the National Gallery of Victoria.

Warlimpirrnga is married with four children and paints Tingari stories for his country, around the sites of Marua and Kanapilya.

'Untitled' 2001 is believed to be Warlimpirrnga's largest canvas to date and as such is an extraordinary visual experience. The design featured in the painting displays the rich optical overall effect that is a feature of recent Papunya Tula paintings and is an innovation within the Tingari ancestral cycle of stories and ceremonies. Lozenge shapes that resemble eyes appear to gaze from the variegated field of dotted lines resembling the effects of wind on the desert sandhills.

Warlimpirrnga's earlier paintings depict segments of the Tingari cycle in the classic Tingari style. This vast, undulating religious cycle re-enacted in men's and women's ceremonies, tells of the journeyings of large groups of spirit beings and novices across the country.

Warlimpirrnga Tjapaltjarri's work is in the collections of the National Gallery of Victoria, Musee National Des Arts Africains et Oceaniens, Paris and the Kelron Foundation, USA.

Browse other works by Warlimpirrnga Tjapaltjarri 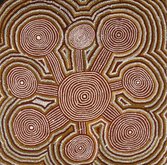