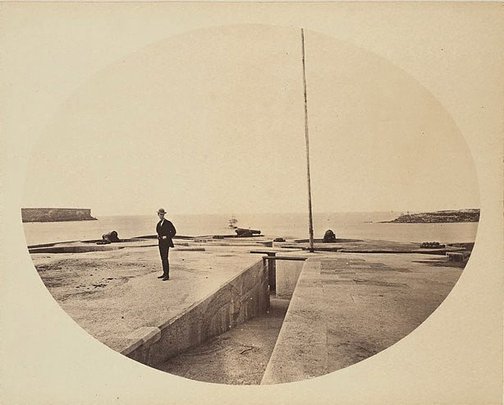 The Middle Head fortifications of Sydney Harbour were not only a favoured destination for tourists; their pictorial possibilities also attracted painters and photographers. Charles Bayliss made a three-albumen vista of ‘Middle Head defences’ in 1874. This was the year in which the fortifications were strengthened, with the arrival of six 18-ton rifled muzzle-loading guns from Britain. Bayliss’s image is a play of horizontals between vista, expanse of sea and the long, sharply defined horizon.

This work by an unknown photographer similarly exploits the geometry of the landscape. The trenches connecting gun pit to magazine, cut deeply into the sandstone, draw the eye inwards and out to sea. The horizon divides the work into two almost perfectly equal sections. Yet this unknown photographer has introduced more contrasts than Bayliss. The sharp vertical of the flagpole is mirrored by the lanky figure turned towards the camera, while the entire composition is framed within an oval. The oval had been used by painters and was subsequently adopted by photographers. Oval vignetting, where a central image dissolves into a surrounding oval ground, was popular in 19th-century portrait photography. The shape was less popular for landscapes – probably because it posed difficulties in terms of composition – but not uncommon. Here it breaks up the prevalent horizontal thrust of the work and gives the viewer the sense of being a vigilant guardsman looking out to sea through a telescope.