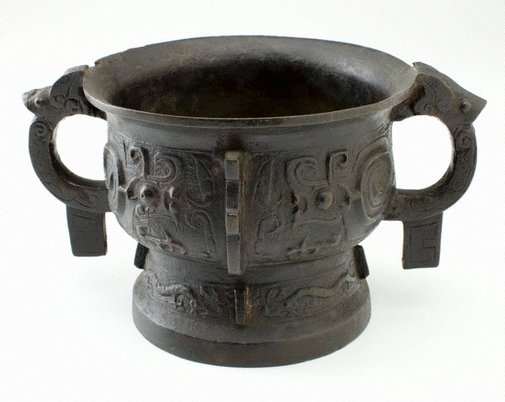 Amongst the ritual vessels of the Zhou period, many more food vessels than wine vessels have been found. The 'gui' was a ritual food vessel used in the offering of cooked meats. While earlier 'gui' tend to be more elaborately decorated, this piece represents a group generally considered to have been produced from the 9th to the 7th century BCE. Typically the body is squat in shape and raised slightly off the ground on three short legs topped by tiger masks. On top of the lid is a broad circular finial which serves as a foot when the cover is removed and inverted. The body is decorated with horizontal fluting and stylised animal bands around the rim of the lid and the body and on the flaring base. The handles are derived from the monster masks found on earlier bronzes.

Zhou vessels are to be distinguished from Shang ones by a marked simplification of decoration and also by a propensity for inscriptions, a propensity that has proved of great help to the historian and scholar - if authentic.

This 'gui' and its inscription are identical to a piece in the Freer Gallery of Art in Washington. The 36 character inscription on the Freer piece, incorporated in both the vessel and the lid, but believed to be spurious reads:-

3. honoured guei to be employed in offerings commemorative of filial piety

4. to be employed in prayers for a vigorous old age - an old age without limit. A hundred birth (!) and