Born in Barbados and educated in London, Eliezier Levi Montefiore arrived in Sydney in 1842 to take part in various family business interests in Adelaide, Melbourne and Sydney. He exhibited drawings in Adelaide and owned watercolours by various artists, including S T Gill, whom he knew. He also exhibited in Melbourne, where he befriended Nicholas Chevalier and in 1870 was appointed a trustee of the Public Library, Museum and National Gallery of Victoria. He finally settled in Sydney in 1871 and took part in the establishment of the New South Wales Academy of Art. He was one of the inaugural trustees of the National Gallery of New South Wales and appointed Director in 1892. He wrote and lectured on art and encouraged the purchase of work by Australian artists such as W C Piguenit and Conrad Martens.

Judging by its size and the pencil border which has been drawn around the image, this drawing may have been intended as a study for an etching. Montefiore was one of the earliest artists in the colony to make etchings, a number of which are in the Gallery's collection. The drawing was originally mounted in an album, on the same sheet as an etching 'Blue Mountains waterfall' 1870s-80s, before it was acquired by the Gallery.

pen and black ink, pencil borderlines on blue-grey laid paper mounted on a leaf from an album

Purchased with funds provided by the Arthur Boyd Acquisition Fund 1998

Browse other works by E.L. Montefiore 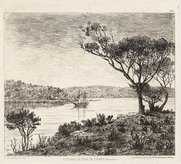