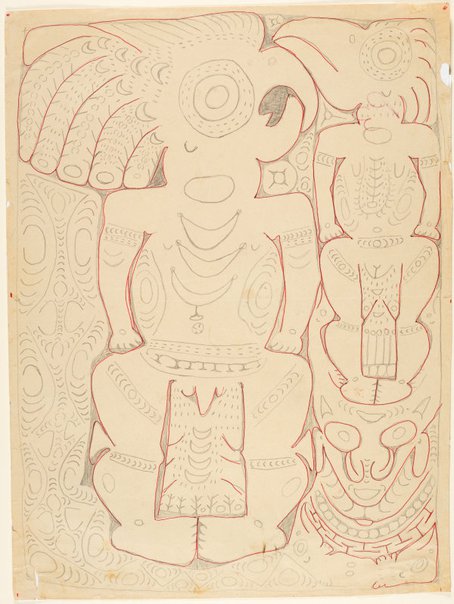 The village of Kambot lies on the Keram River, a tributary of the Sepik River in Papua New Guinea. Home to the Ap Ma people, the river was first visited by Europeans during the 1913 'Kaiserin-Augusta-Fluß Expedition', as the Sepik was called during the German colonial period. Known then as the 'Töpferfluß', or 'Potter's River', the Austrian anthropologist Richard Thurnwald is known to have collected around 70 of the extremely rare Keram River 'feather shields' during this expedition, as well as examples of locally made ceramics.

In 1928-29, Chicago's Field Museum financed the Crane Pacific Expedition, whose members took the first photographs of the towering ceremonial house in Kambot, with its painted gable depicting the paramount ancestor Mopul. They also entered the concealed chamber filled with sacred objects, including skull reliquaries. By this time the first missionaries had travelled to the lower Sepik, with Father Franz Kirschbaum of the Society of the Divine Word (SVD) establishing Marienberg Mission Station in 1913, and accompanying the Crane expedition along the Keram River. Father Ignaz Schwab established an SVD mission in Kambot in 1933.

Although birth records did not exist, it is believed the artist Simon Nowep was born in Kambot around 1902 and at a young age was entrusted as a custodian of sacred knowledge, and trained to paint and carve. In 1971, one of Nowep's sago palm leafstalk panels ('panggal') depicting Mopul was collected by the National Museum and Art Gallery in Port Moresby and inspired the painting created for the façade of the new museum, which opened in 1977.

When Australian teacher Helen Dennett arrived at the Sepik government station of Angoram in 1973, she encouraged artists to take pencils and paper back to their villages and to make drawings. Two Kambot artists, Ignas Keram and Zacharias Waybenang, brought back drawings made by Nowep which impressed Dennett. By that time Nowep was in his early 70s, a leading artist and Kambot elder, highly respected in his village. Dennett travelled to Kambot to meet the artist and over the following three years he produced 90 drawings. The book 'Simon Novep of Kambot' was produced by Dennett in 2012 and - as instructed by Nowep - all the drawings were reproduced in reverse, white-on-black, as were all traditional sago petiole paintings. As a result, on some of the drawings, including this one, Dennett traced over the artist's linework with ink or pencil to assist with the reproduction process.

Nowep's drawings in this collection depict Mopul, his brother Wain and his two wives, as well as the many spirits and demons from the Kambot pantheon, including the powerful spirit Serampan, and the brothers Lawena and Dawena. Nowep also drew images of of the Christian God, as well as daily village life and the patterns of nature.

Browse other works by Simon Nowep