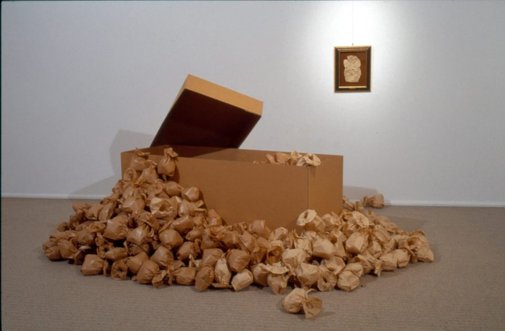 Born in Italy and raised in Australia from the age of four, Katthy Cavaliere’s work encompasses performance, installation and photography, and explores personal narratives, often by using the artist’s personal possessions and through her obsessive self-documentation.

In 2000, Cavaliere won the Helen Lempriere travelling art scholarship and went to Italy. 'brown paper' was made there while Cavaliere was studying at the Accademia di Belle Arti de Brera. She was chosen among a small group of students to attend a workshop taught by Marina Abramović and 'brown paper' was performed and displayed in the group exhibition at Ex Chiesa di San Francesco in Udine.

Cavaliere lay naked in a large coffin-like cardboard box and repeatedly blew air into brown paper bags. She placed some of the bags onto her body and cast others outside of the box, surrounding herself with her captured breath. Describing the work as a ‘portrait of the soul’ 1, the bags represent lungs in the universal human function of breathing. Accumulated over approximately one hour of performance, the bags came to represent the ‘first and last breath of life and all the ones in between’2. Of the cardboard box Cavaliere wrote: ‘our bodies live in houses and die in coffins’3.

Cavaliere’s continued use of particular materials in her work, and particularly her use of found and low-cost materials, links back to an early interest in the Italian Arte povera (poor art) movement. Cavaliere’s ability to elevate everyday objects imbue works such as 'brown paper' and 'nest' with special meaning.

Gift of the Estate of Katthy Cavaliere 2016

Browse other works by Katthy Cavaliere 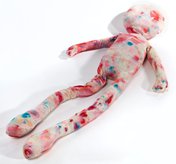