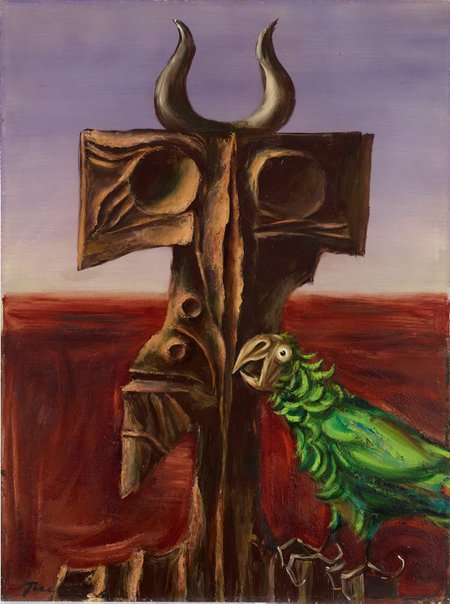 As an expatriate artist living in Italy in the mid-1950s, Albert Tucker began to explore the ideas and imagery of the Australian landscape and mythology. ‘I was having nostalgic memories of Australia. I was remembering the dryness and gum tree trunks… I had that sense of dried out cratered form which were also volcanic landscapes, and they could also be wounds and gashes.’ 1

This nostalgia for the harsh Australian landscape was explored in works such as 'Antipodean head II' 1959, with its bark-like head. With distance from his home country and the passage of time, Tucker’s work began to move away from the religious imagery which had surrounded him in Europe – ‘the Saint Sebastians, the Christs, the Martyrs and Crosses and Virgins’ to explorers, such as Burke and Wills, masked intruders, fauns and the Ned Kelly myth, which gave his work a new focus. A double-headed axe Tucker had viewed in the Etruscan Museum, combined with the shape of Ned Kelly’s famous armour led to the development of Tucker’s distinctive angular-profile heads, seen in works including 'The intruder', which has a rough, lunar-like surface achieved through using plaster to build up the paint surface in particular areas – Tucker’s method of capturing the uniqueness of the ancient Australian landscape.

The parrot is another reoccurring motif in Tucker’s work, considered by the artist to be a ready-made symbol. Tucker said: ‘The claws that tear and the beak that rips in the middle of the colours of paradise… heaven and hell incorporated in one natural form – beautiful but murderous inside – a conflict between destruction and creation’.2

oil and plaster on board

Gift of Barbara Jools in memory of Dr Nic Jools AM 2016. Donated through the Australian Government's Cultural Gifts Program